The demonetisation-enabled cash crunch in India has hit people hard. And no matter how much you try to rely on plastic money and digital wallets, the Indian economy is still hugely cash reliant at the end of the day. RBI's data indicates that even when Indians use cards, it’s more to withdraw cash, than at point-on-sale terminals

That’s precisely why since PM Narendra Modi’s announcement almost two weeks ago, long queues outside ATMs have become a regular feature. To help with the situation, a number of Internet services have built tools for people to look for nearby ATMs with cash. Cash No Cash is perhaps the one that has gained the most popularity, but there are plenty of others, and one of them is Walnut, a SMS-based expense tracker built by a team in Pune.

On Android, the app provides goes through incoming SMS from your bank, and provides you with a report on your expenses. On iOS, where Apple doesn't allow SMS tracking, Walnut lets you split bills with friends, by sending and receiving money directly from your bank, removing the need for mobile wallets.

Unlike most other services, Walnut’s ATM search tool – which it has dubbed #ATMwithCash, going by searches on Twitter – isn’t a straightforward ATM locator. Rather, it’s driven by data collected from its 1 million+ users, which helps the app tell others when an ATM was last active, whether it’s functioning, and even the length of the queue.

“Our #ATMwithCash feature builds on the data we already have, at an anonymous and aggregate level,” Walnut co-founder and CEO, Amit Bhor tells Gadgets 360. “Basically, because we have all this data from our users coming in, we can figure out which are the ATMs that are active and we have recent transactions from. On top of this, we are also asking our customers additional info: whether the queue is short or long, what bank ATM this is, and so on.” 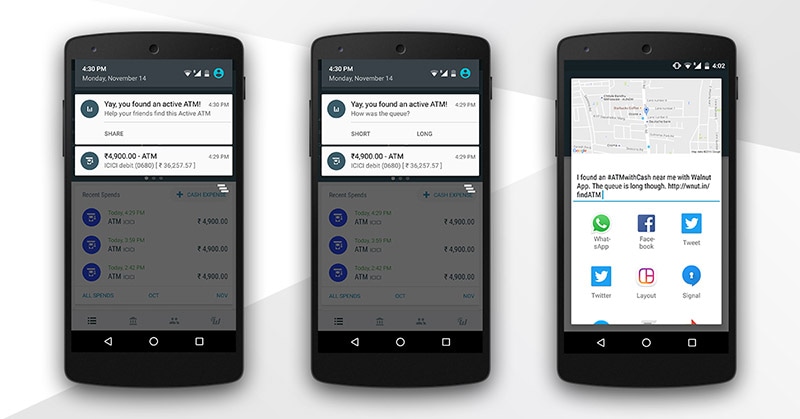 This has proved to very useful to a lot of people. And it shows, Bhor says, as the app has seen a “15x jump” in user growth in half a week’s time. On Thursday, Walnut broke into the Top 100 charts in India on Google Play Store. And owing to the cash crunch, the app has seen a 4-5 times growth for payments made through the app, be it bills or splitting costs with other Walnut users.

The #ATMwithCash feature is currently tracking 38,000 ATMs across India, Bhor says, out of a total of 202,800 ATMs, as per the RBI’s latest report. Considering the app has just over a million users, that’s understandable. Walnut is available on smartphones only, and hence the app has a much higher accuracy of ATM tracking in the metros. Bhor claims a 90 percent accuracy rate in metros, which goes down in other cities because they “don’t have enough concentration of data coming in from there”.

That’s because we have more users in tier-1 cities, Bhor tells us, as compared to tier-2 and tier-3 cities. “So, because of this natural distribution, our ATM database also follows the same pattern,” he adds.

The information for Walnut’s ATM database is dependent on two aspects – the app, which scans any incoming SMS from a bank, and crowdsourcing. That means if you’ve instructed your bank to not send you a message for every transaction, you won’t be able to use Walnut for automatic expense tracking, or contribute to their #ATMwithCash database. You can still find ATMs, though.

As for the latter – crowdsourcing – a new feature was rolling out when Bhor spoke with us on Thursday. “By asking users what currency notes the ATM is giving – 2,000 rupee notes, or 500 rupee notes – Walnut can tell its users which ATM they are more likely to get money at,” he adds. The feature helped Walnut become the most-downloaded Finance app on Google Play India.

It's hard to say whether the app will hold its ground once the cash crunch period is over, but Bhor will hope that the new users stay put once they have experienced the seamless nature of expense tracking and bill payments Walnut affords.

Update: A new update to the Walnut app on Wednesday, November 23 now sends you a notification if you are near an active ATM.

Further reading: Walnut, demonetisation, Google Play Store
Akhil Arora Email Akhil Akhil Arora covers entertainment for Gadgets 360, interviewing stars such as Christian Bale and Anurag Kashyap, covering series premieres, product and service launches across the globe, and looking at American blockbusters and Indian dramas from a global socio-political and feminist perspective. As a Rotten Tomatoes-certified film critic, Akhil has reviewed over 150 movies and TV shows in over half a decade at Gadgets 360. When he is not completely caught up with new film and TV releases, Akhil ...More
Vivo V5 Review
Narendra Modi App Now Lets You 'Share Your Opinion' About Demonetisation