How SimplyGuest Wants to Build A Different Kind of Hostel

Renting a house is a real challenge, but it's one that is been steadily getting more organised. Renting a PG accommodation, however, remains a lot less formal, and it can prove to be quite difficult. There have been a couple of different companies that have attempted to solve this - Wudstay is one such company we've profiled before, and some other players in this space include Nestaway and Zolo.

SimplyGuest is a Bengaluru-based company looking to solve the same problem that's been bootstrapping and growing for two-and-a-half years now. It started off with housing rentals, but why it stands out is because you don't just rent the house. SimplyGuest works with the landlord to take care of other basic requirements like hiring domestic help, getting DTH and Internet connections in place, and even help you rent a cycle, if you want. The idea is not just to save you the hassle of arranging all these things, but also to provide unified billing for all of them.

Now, SimplyGuest is launching its own Hostel platform, starting with a single hostel in Bengaluru. "We launched it now but it's actually been functional for two months now as we've been testing different things and tweaking the offerings," says Subbu Athikunte, one of the two founders of SimplyGuest. The idea is to work as a platform, and SimplyGuest is not as hands on, arranging the maids and services. Instead, with hostels, the company wants to work with a landlord who is more directly in charge.

Athikunte explains that SimplyGuest is instead going to focus on the technology side of things - payments, complaints, and tenant management, and leave the daily operations to the landlords. "Additionally, we take care of the sales and marketing,” he adds, "something like what Oyo and Treebo do with hotels." As a prospective tenant, at the time of booking you get to see a lot of data such as the age groups and professions of the other tenants, the vegetarian and non-vegetarian split, and more. The goal, Athikunte says, is to make a "different kind of PG", which is something that the duo actually tried earlier too, though with less success at the time. "The first idea we had when we were starting up was a a certified house rental service. Like, are all the taps and lights working, are there any defects, that sort of thing," says Athikunte. "Like you have second-hand car certification. Because what happens is you go and see the house and it looks good, but you're not checking off every item at that time, so small things you might miss. But people were not keen to pay for that."

"Then we were thinking of a PG listing service, but the sector is very unorganised, and for the landlords, there is no shortage of demand, so they are not incentivised to let technology in," he adds. "That's when we thought we could create an alternative to PGs. That's where SimplyGuest first started, but we're in a position now to start with a full hostel option as well."

To do this, the team had to work to find the right kind of landlord - the idea is to look at the premium space for PGs, and the target audience are working professionals. "We have private rooms, double sharing rooms, and triple sharing rooms, but this is not an overcrowded hostel," says Athikunte. "There are 12 rooms in the entire building and we aren't targeting 100 percent occupancy. There will probably not be more than 24 people in the whole building, and the entire ground floor is left for dining, living, just spending time there." 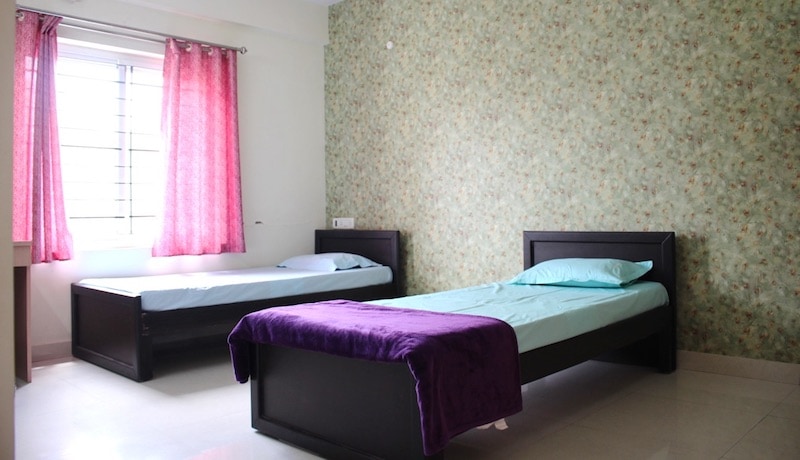 Like other SimpyGuest buildings, tenants can pay for the services online using and instead of having to call up the owner if there’s any issue, a ticket can be raised within the SimplyGuest platform. But what’s even more interesting are some of the plans Athikunte says are in the pipeline.

"We're trying to tie up with local services such as laundry services, food deliveries, we can integrate the different services into our own system," he says. This means that a tenant would only need to use SimplyGuest to take care of necessities and make a single payment at the end of the month.

It's an interesting idea, but in the past we've seen brokers (and even landlords) oppose technology platforms, particularly in cities like Bengaluru where the system is skewed against tenants. Athikunte acknowledges this, and says that SimplyGuest is expecting some friction from traditional PG owners.

"They see us as an expense, but the promise we're making is increased occupancy rates," he says, adding, "and we also tap into a different kind of market - say you move to a city, you could stay in a hostel to start with, then move to a house, and then at a later point when you're leaving move back to a hostel. With people being more mobile than before it's important to meet the demand, and we help people to move also. We'll continue to see some friction of course, but people are slowly accepting that this model exists."

Further reading: SimplyGuest, Real estate, Paying guest, PG housing, Online rentals
Gopal Sathe Email Gopal
Gopal Sathe is the Editor of Gadgets 360. He has covered technology for 15 years. He has written about data use and privacy, and its use in politics. He has also written extensively about the latest devices, video games, and startups in India. Write to gopal@ndtv.com or get in touch on Twitter through his handle @gopalsathe with tips. More
Black Friday 2017: Sony India Discounts PS4 Slim, PS VR, Uncharted 4, and More
Pixar's Coco Is a Beautiful, Good-Natured Celebration of Family

How SimplyGuest Wants to Build A Different Kind of Hostel
Comment