A large gaming news story cutout from a leading Indian newspaper welcomes us as we enter one of the numerous meeting rooms at a plush five-star hotel in the heart of New Delhi. Vesa Jutila, co-founder and Vice President of Content and Commercial Partnerships, Hatch Entertainment, who's flown in to the scorching Indian capital from the cool Espoo, Finland, is waiting eagerly to talk about how E3 2018 had been all about cloud gaming with companies like Microsoft and Ubisoft looking to get a bite of the pie in the years to come.

Hatch Entertainment is a spin-off from Rovio Entertainment, the studio that brought us the ultra-popular Angry Birds and its numerous sequels. Jutila, who was previously a Vice President at Rovio, wants to bring Android mobile games to users based on a subscription model. But that isn't new, not even for the Indian market - players like Zapak, Indiagames, and Nazara have tried a subscription model on both PC and feature phones earlier.

"There are two things that need to come together - subscription and on-demand. When you put those two things together, the value proposition becomes really attractive," says Jutila. Hatch claims to be the only solution out there that lets you stream mobile games without the hassle of downloading, installing, or uninstalling big APK files. He believes the addictive nature of on-demand video will carry forward to the gaming industry as well.

"We are kind of very close to what Spotify is offering [in music]," he says. "We have a free version - you can download for free, you can play for free. And we monetise with advertising. For example, when you are browsing through different games, we have ads in the UI. Before you start a game, we have a pre-roll ad. But, inside the game, there are no ads. So, the games offer a premium, undisrupted experience. We will be bringing a paid subscription model. We haven't set the pricing yet, but that will most likely be a market-driven strategy."

Quality control
Premium and Quality were two buzzwords that Jutila used most frequently during our conversation. Hatch is not an open platform for developers to jump in and do their thing. He mentions that quality control is key for the company, and only a few select developers will be able to showcase their games. "It's like Netflix," he says. "We are fully controlling the games we feature and have on the service."

Currently, during the beta testing phase, Hatch boasts of games like Angry Birds, Crazy Taxi, and Monument Valley, with major game developers set to come on board. For India, he believes that a hint of local flavour would be welcome but it's not crucial to Hatch's plans just yet.

"Overall, the feeling we have now is that the need for local games is not that huge," Jutila explains. "Gaming is typical pretty universal, if you see the phenomenon of games like Fortnite and PUBG." 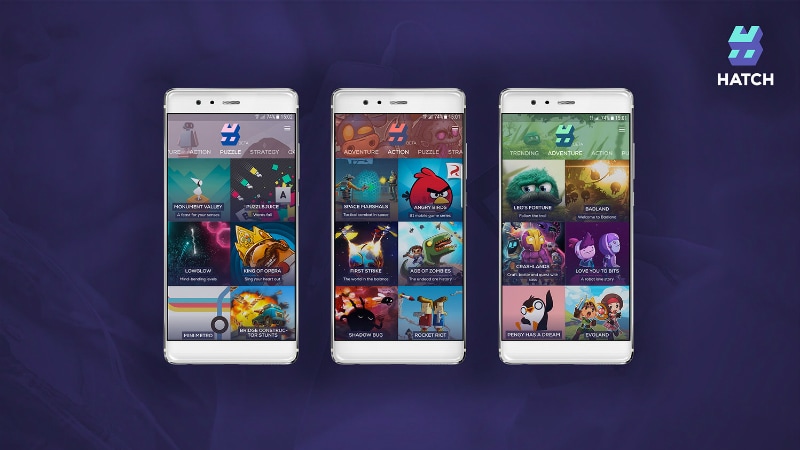 That said, he seems optimistic about the talent in the Indian game development industry. "If there's somebody who is super excited to work with us, even here in India, we are open to get high quality games on board."

Hatch is currently in a soft launch phase; it is currently beta testing its features in 18 countries, most of them from Europe. Ahead of going into markets like the US and Canada, the company wants to set up operations in India. Jutila has been mapping the growth patterns in India for the past couple of years now.

"Mobile data consumption has gone through the roof, 4G is exploding. We just read that in the next five years there will be more than 800 million 4G/ 5G enabled subscribers in India. Hatch is perfect for Indian consumers," he says.

India focus
While coverage has definitely grown in the country thanks to the advent of Reliance Jio, mobile data speeds and reliability remain issues that are yet to be tackled, especially in densely populated cities. Even several ISPs in the country are known for offering terrible latency, something that directly impacts online gaming.

"We are not using video-based streaming, which means Hatch is a lower bandwidth, lower latency solution," says Jutila. "Currently, bandwidth consumption is around 200Kbps which is much lower than Netflix or other HD video streaming services. So, 4G or even 3.5G connections are perfectly fine for running games."

Hatch claims to use an almost zero latency technology. "We render in real-time," he adds. "Of course, there is the issue of latency in the network but we at least take care of the inherent latency issues in streaming."

Hatch is serious about the Indian market. It has set up its first data center in Chennai and technical testing is on. Using the inputs from the data center, Jutila says, the company can judge what will be the market conditions and network issues that Hatch is likely to face in the country. The company will introduce an invitation-only closed beta programme for select customers in the months to come.

Hatch wants to tackle the problem of limited storage space on mid-range smartphones in the country, an issue other companies like Tencent have observed as well. With the service, the hassle of downloading big game files will be eliminated. Add to that, all the computation is said to be done on Hatch's servers, so premium mobile games could potentially be played on devices that lack high graphics performance.

Monetisation
Talking about the money side of things, Jutila believes Hatch has something that no other player currently offers in the market. "Free-to-play model with micro-payments is the most popular gaming method," he says. "At the same time, we also see from user data that only a small fraction of them will ever spend a cent in free to play games. So, there are not a lot of users who are purchasing the pay-to-download games on the Play Store."

He believes the entry of a new monetisation medium in the premium segment is needed, and that is something that Hatch offers. Hatch can bring the advertising model to the premium mobile gaming segment and, possibly, a subscription model for those who are looking to pay the extra amount for an ad-free experience.

Cross platform possibilities and security
Hatch's data center requires only an Android APK version of the mobile game; the additionally personalisation for features and design elements is done solely by Hatch, the developers need not create a custom version for the platform. So, while there is currently only an Android version of the game streaming platform, we could expect it come to iOS eventually. And, when it does, Android APKs could be optimised to run on iOS devices in the same way, Jutlia claims. "It is very easy for us to port the provided APK on to any platform in the future." he says. "We are platform agnostic."

The fact that all the processing is done through a single APK stored on Hatch's servers is what makes the entire system secure, he claims. "When no code is installed to the device, you don't need to worry about any malware. It's a super secure way to do it," says Jutila. Even the company's gaming partners seem to love this addition. "No code is being distributed, they are safely running in a secure data centre." This is particularly beneficial for premium games on Android where, he claims, piracy has been a major issue.

"We are platform agnostic"

Social discovery
Social discovery for Hatch, much like most other major gaming providers out there, is an area of special focus. Over the last few months, the company has improved upon its in-app design offering the ability to be featured on social leaderboards and share gameplay footage with friends. "Social discovery will be an important aspect on our platform because, as always, recommendations through your own friends are so much more powerful than what somebody else is recommending," says Jutila. "Mobile gaming has become a very lonely experience. We want to turn that around with our social discovery features."

At the moment though, any form of sharing seems to be limited to within the Hatch app itself and not Facebook or Twitter, which means you'd need your friends on the service to make the most of this feature right now.

In addition to this, Hatch has a rather interesting feature wherein one player can invite up to three other players into the same game. This ends up converting the single-player mode of a game into a sort of multiplayer mode that users can interact with simultaneously not too dissimilar to Nvidia's Gamestream Co-op feature on Windows PC. A demo of this feature seemed promising but scalability is an issue that Hatch will have to tackle when it grows to accommodate thousands or even millions of users.