How One App Enabled Entrepreneurship in a Gujarat School

It's not often that Silicon Valley executives head to a city in Gujarat to see why their app is popular in one school. But when students of S N Kansagra School in Rajkot used Edmodo to manage their annual school bazaar, Ketan Kothari, the app's Vice President Marketing, felt he should visit the school to see how they used the app.

The event - Galaxy Bazaar - encourages commerce students of classes XI and XII to create, purchase and sell products ranging from handicrafts to bikers' accessories. Each student pitches in with Rs. 500 for the capital and like any modern company, all the students take up various roles such as CEO, management, and project leader.

So where does Edmodo come in the picture? Kothari says Edmodo co-founders Nick Borg and Jeff O'Hara started the service to help schoolchildren communicate and collaborate safely.

"Nick Borg and Jeff O'Hara worked in IT departments at local schools in Illinois to block social networking sites being used in the classroom," says Kothari. "That made them think of building a secure social network specifically for the classroom environment that was safe for children." This was something that would serve the needs of the students in SNK School.

Bijal Damani, the social entrepreneurship teacher who is in-charge of Galaxy Bazaar, says the bazaar started in 2005 with 28 students participating. The initiative was a success and by 2009, around 150 students were involved in managing Galaxy Bazaar. "With that many students, coordination had become difficult. The school principal told us about Edmodo (then a Web-based service) and I was among the first teachers in the school to put it to use," Damani says.

The app, which is available on Android and iOS, and the website, allow students to collaborate and plan their work, without the distraction of a bigger network like Facebook. 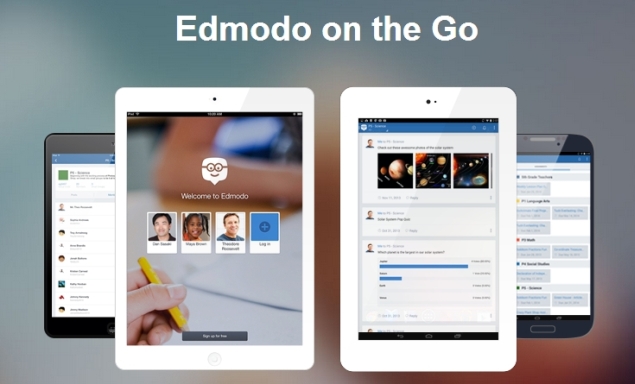 Students Jeshil Adeshra (CEO of last year's Galaxy Bazaar) and Akshay Kotecha (head of documentation and communication) say they had been using Edmodo for several class projects apart from Galaxy Bazaar. Adeshra felt the app made their work simpler.

"Definitely it [Edmodo] reduced our work load to a huge extent," says Adeshra. "Communicating and collaborating with a huge group and tracking transactions would not have been possible without this platform."

Their batch-mate Abhi Kamdar, who recently cleared his Class XII examination and was the marketing and venue management head for the event, feels Edmodo's mobile apps helped students stay updated.

"For an event like Galaxy Bazaar where we were a team of nearly 120 students, we needed to be in constant contact with our fellow students and juniors to guide them," says Kamdar, "It served as a coordinating platform. so definitely we used Edmodo constantly and got notifications on our mobile phones for updates."

When working with her students, Damani used the app to ensure complete coordination.

"I created several polls for students' opinions and feedback, which reduced my work. We also managed to avoid redundancy," says Damani. "Different students were no longer approaching the same sponsor."

One feature which appealed to the students was that teachers can use the system to award badges for good work.

"My teacher gave me many badges whenever I did wonderful job. She had personalised the badges for different projects. That was so sweet," Adeshra says.

"I liked the poll feature most in Edmodo. It can help teacher or the admin reach a consensus, which in turn helps in decision making," Kotecha says.

Since its inception, Galaxy Bazaar has always generated a profit. The proceeds go towards funding the education of underprivileged students.

"SNK School's fee isn't exactly cheap, so the profit that Galaxy Bazaar generates helps sponsor the education of those who cannot afford education in this school," Damani says.

Although this initiative had a humble beginning, with a profit of just Rs 8,000 in 2005, last year the profit was a whopping Rs 9.24 lakh. Damani says Edmodo has played a vital role in improving students' efficiency. Today, she says, many SNK School teachers encourage students (from as early as class V) to use the app.

Having seen all of this, Edmodo's Kothari was, in his words, "Amazed!" According to him, the Galaxy Bazaar is the kind of use case which has helped the app grow as well. He says that most of the app's growth has been due to word-of-mouth publicity.

India, he adds, is among the top 20 of the 190 countries where Edmodo is used.

"There are still issues related to connectivity and usage of devices (primarily computers and tablets) in India, which is why India isn't in the top 10 yet," says Kothari, adding, "We've seen significant adoption of Edmodo in Uruguay where there was a countrywide initiative to bring connectivity and devices to classrooms. Much of the Edmodo adoption we've seen internationally has been organic, and we are looking to make more targeted efforts to spur engagement in countries like India."

Kothari - an ex-Apple employee - joined Edmodo in 2010, before which he had been working on a project called Root-1 with "two struggling Googlers". Root-1 had coded game-like apps for education, to improve areas such as vocabulary and memory and it is the integration of these technologies that Edmodo is now working on, Kothari said, giving a glimpse of how social media and education could be further integrated in the future.

The students of SNK School have some ideas regarding that. "A live bulletin board, audio message service and live video conferencing facility (like Google Hangouts) will definitely make Edmodo a great tool for education," Adeshra says.
Comments