Mumbai-Based Flock Continues to Target Slack, Bets on Automation Instead of Bots

Slack continues to dominate the team-chat aka workstream collaboration (WSC) space and it's the most recognised tool of its ilk today, but Flock from India has been plugging away at it for some time now. While Slack rolled out paid plans pretty quickly, Flock remained free as a way to get people on board, with a focus on growth.

That changed this January, when the company introduced a paid plan, with the belief that it had reached a baseline where it can start charging. While founder and CEO Bhavin Turakhia doesn’t share the number of paid users Flock has, he mentions the company has seen 233 percent growth in paying customers since the month of launch. He also shared that 68 percent of new users sign up for Flock's annual plan, instead of month-on-month, and that 40 percent of new users pay for Flock after just two days of free use.

Turakhia says that Flock now has around 135,000 weekly active users - that's almost three times as many as he cited last year, when flock had around 50,000 weekly active users. However, that still pales in comparison to Slack, which claims 9 million weekly active users. Turakhia rightly points out that it's still a very nascent industry, and compares it to the state of email 20 years ago. However, it's clear that Flock very much has Slack on the mind - aside from the Slack migration tool launched last year, Turakhia - and also many Flock promotional videos on YouTube - make direct comparisons to Slack, looking at features, pricing, and support.

It doesn't hurt Flock’s case that it is relatively affordable, when compared to Slack. Where Slack starts at $8 (roughly Rs. 533) per user per month (or $80 annually at $.6.67 a month), Flock is $3 (roughly Rs. 200) per user per month, and in India it's Rs. 199 per month or Rs. 1,788 annually, at Rs. 149 a month. The paid version removes the 10,000 searchable messages archive limitation, doubles the per user storage to 10GB, and promises priority support. The lower rate is partly made possible by the fact that much of the engineering for Flock is happening in India, so the cost of development is significantly lower, Turakhia admits, though he adds that it's also because Flock is still growth-oriented. 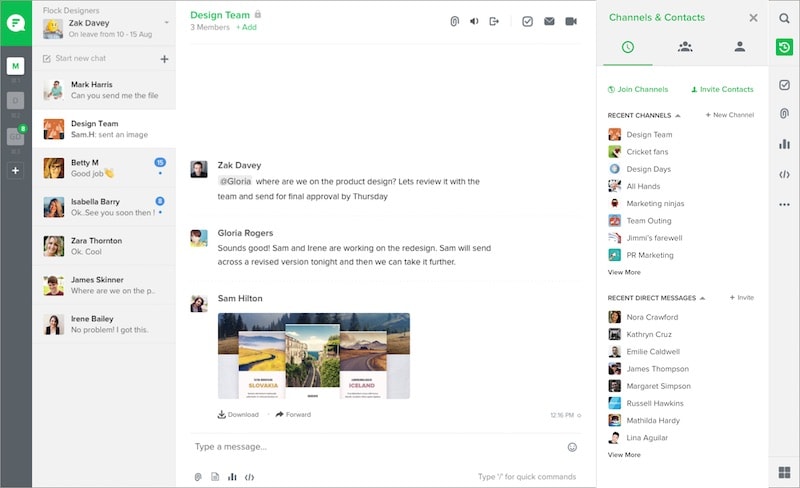 Perhaps the most interesting thing about Flock right now however is not it's David vs Goliath attempts to take on Slack, but rather, how it's looking at chat as an evolving part of the workplace. Devashish Sharma, CTO at Flock, explains how exchanging messages is a very "surface" use of the platform, and how AI and ML can be used to garner insights from the vast amounts of data being shared.

"Your employees are chatting on Flock and sharing all kinds of messages, about the company, about the work, and then people are going to put a lot of this same data into reports," he says. "What if this could be automated? How about sentiment analysis? So that you can tell how the company morale is, and take steps to keep your employees happy. You could also monetise the network by pulling insights from it that could be used, all sorts of things are possible depending on the data that's there."

This isn't something that Flock is actively working on, Sharma stresses, and it's really not much more than an idea at this point. However, it's something that people in the labs at Flock are looking at, and trying to find different ways in which AI can be feasibly applied to chat, to make it more useful to the enterprises and individuals. "It's something that could be done down the line," he adds, "I just can't give you a timeline right now.”

What Flock is introducing now is a new feature called Process Automation that enables anyone - without any programming knowledge - to create workflows for form submissions, which could be used for process management, HR forms, and so on. Ninad Raval, VP Product and Design, Flock says the new process automation tool should be a big selling point with businesses as bringing process automations into Flock can help overhaul IT-based processes.

We ask Raval if businesses would be better served by bots instead? He disagrees.

"Bots are for power users and not everyone wants to chat with a bot." says Raval. "If it's something simple like setting up a reminder or a poll, sure, [you can use a bot]. But if you want to apply for leave, there are a lot of different pieces of data to give, and if it isn't all formatted exactly, then you're going to get stuck in a loop where the bot says it doesn't understand that.”

"Whereas everyone knows how to fill a form. So it becomes much more useful,” he adds.

Further reading: Flock, Slack, Chat apps, instant messaging, Bhavin Turakhia
Gopal Sathe Email Gopal
Gopal Sathe is the Editor of Gadgets 360. He has covered technology for 15 years. He has written about data use and privacy, and its use in politics. He has also written extensively about the latest devices, video games, and startups in India. Write to gopal@ndtv.com or get in touch on Twitter through his handle @gopalsathe with tips. More
Chrome OS Linux Apps Support Spotted in Beta
NASA Spinoff Technology Challenge Hit by Hackers Looking to Sway Results

Mumbai-Based Flock Continues to Target Slack, Bets on Automation Instead of Bots
Comment