How Will Hike Offer Messaging, Payments, and News Without Internet? All Your Hike Total Questions Answered

Indian messaging app Hike on Wednesday announced Hike Total, a new platform that will enable access to Hike Messenger and certain other services without an active Internet connection.

At an event in New Delhi on Wednesday, Kavin Bharti Mittal, the CEO of Hike - which was valued at $1.4 billion (roughly Rs. 8900 crore) the last time it announced a round of funding - said Hike Total is designed to simplify the process of “coming online” for millions of Indians who own a smartphone but don’t use Internet regularly.

“We’ve taken the 15-20 step process of someone coming online and made it into only a few steps,” Mittal said. “Buy a phone, turn it on, and you’re good to go. All the essential services work out of the box, even without data.” Well, that’s the idea anyway.

So what exactly is Hike Total, and how does it work? Here’s everything you need to know.

What is Hike Total?
Hike Total is a customised version of Android designed to enable the use of certain services without an active Internet connection. By making changes to certain components of the operating system, Hike Total is able to control the user experience in ways that wouldn’t be possible otherwise - more on that in a bit.

What services can I use?
To start with, Hike will offer access to Messaging (Hike app only), News, Cricket, Horoscope, Rail Info, Recharge, and Wallet (again, just Hike). Mittal told Gadgets 360 more services will be added in the future, with Bollywood and devotional content, among others, on the radar of the company to complete the ABCD - Astrology, Bollywood, Cricket, Devotional - quartet that’s long been considered as a staple for the Indian audience.

How does it work?
It may sound like magic, but the underlying technology behind Hike Total is actually rather primitive. Behind the fancy UI, Hike Total is built on top of USSD, a communication protocol supported by nearly all GSM phones that’s been used by operators to deliver all kinds of services for nearly as long as mobile phones have been around. If you’ve ever dialled a code like *121# to check your prepaid balance, you’ve used USSD codes. Most telecom operators offer a large set of services over USSD codes, and OEMs have tried to hide some of the complexity by offering a menu-based interface to some of these services, so it’s possible you’ve used USSD without even realising it.

Hike Total uses a bunch of USSD codes to enable the use of Hike services without an Internet connection, though Hike uses something it calls UTP (Universal Transfer Protocol) that Mittal says makes communication using USSD more efficient and secure.

How do I get Hike Total?
Since it’s a custom version of Android, you will need to buy a smartphone that comes preloaded with Hike Total to be able to enjoy its benefits. Indian budget smartphone makers Karbonn and Intex are the launch partners that Mittal announced at the launch event in New Delhi on Wednesday. Intex will launch three smartphones, while Karbonn will have a solitary offering. The smartphones are expected to hit the market on March 1 with prices starting at Rs. 3,000 (roughly $45).

Are there any limits to this “free” usage?
Mittal says Hike Total’s services are free to use without any limits. You get a limited experience with certain services like messaging, for example, where you will not be able to send or receive photos, for example, and will be promoted to buy a data pack. You can, however, use stickers without data, which is great - right?! 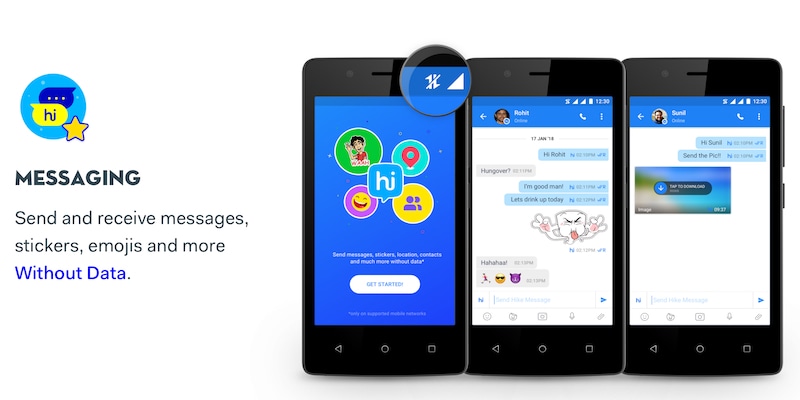 Why can’t I get this on my existing smartphone?
So, if it’s just a fancy wrapper on top of existing technology, why can’t this be an app on your existing Android smartphone, you might be wondering.

“You can’t make the app work without data,” said Mittal. “To get hold of the USSD channel, you have to modify the Telephony layer in the operating system. We’ve done that. That’s what we have filed a patent for as well.”

What’s this data up-selling?
Like we mentioned before, if you don’t have an active data connection, you will be promoted to buy a data pack when you try to do things that will require the Internet. So every time you try to send/ receive a photo, make a video call, or tap a link your friend just sent, you will see a prompt that says this operation requires an Internet connection, with a list of packs to choose from.

Once you start using Hike Total, it’s easy to imagine you’ll run into these prompts pretty regularly, given the limited experience you get with Hike services, compared to, well, the entire Internet you can experience with a data pack. Once you get a message from - let’s say a friend - on Hike encouraging you to check out the hot new video everyone is talking about, you’ll be pretty motivated to buy a data pack, especially if it’s affordable and there’s an easy way of making the payment - and Hike Total delivers on both counts.

What are these data packs priced at?
Mittal claims Hike Total will offer data at rates cheaper than the market, with data packs starting at as low as Rs. 1 (roughly 1.5 cents) for 20MB of data (as of now). Some of the packs you’ll be able purchase via Hike Total would be priced at a discount compared to what you’d get directly from the telco.

In addition to the amount of data that each pack offers, users will also see what this data will be good for - 20MB of data is good to send and receive 100 photos, for example, or listen to 5 songs, or watch 4 minutes of videos (as per Hike’s estimates). This, Mittal says, will help first-time Internet users better understand what they will get with each data pack instead of “MB/GB”. 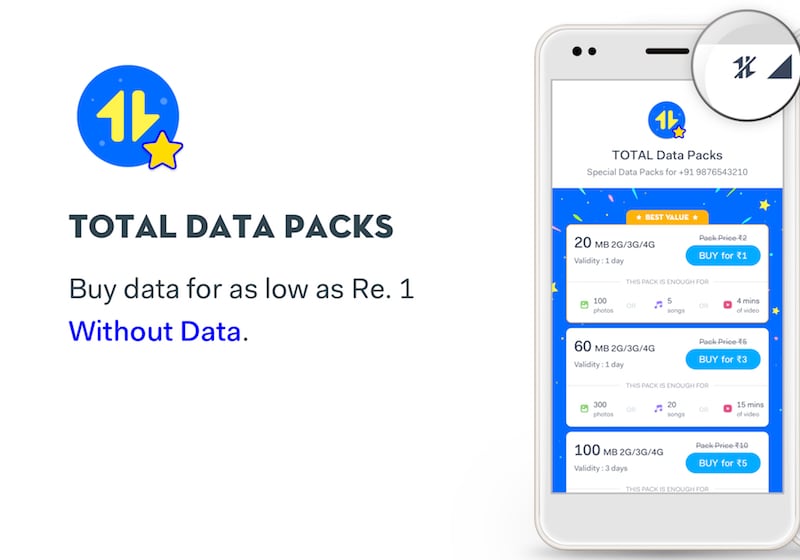 How do I pay for these data packs?
From your Hike Wallet of course! It’s the only option to pay for data packs as of now to ensure that the entire process is pretty seamless. To help you get started, Hike is offering Rs. 200 (roughly $3) as free cash if you complete the KYC process, which you will be encouraged to do when you are setting up your Hike Total-based smartphone. Getting money into your Hike Wallet from your bank is pretty easy thanks to UPI, which too works over USSD.

Can I use Hike Total with any telco in India?
As of now, Hike Total will work only with Bharti Airtel, Aircel, and BSNL SIMs to begin with, though Mittal says Hike is looking to get other telcos on board as well. Hike counts Bharti, Tencent, Foxconn, Tiger Global, and SoftBank among its investors.

What’s in this for Hike? And the telcos?
The second one is easy enough to understand - they want to sell you data packs and increase their revenue. Probably a small one to begin with, and as you get exposed to all the wonderful things on the Internet, and realise you can’t image your life without it, get you on a regular data plan.

Messaging apps are hard to monetise and for Hike, Total represents a potential opportunity to make some money off its platform via commissions on the data packs that are sold. Hike would also hope the allure of “free” messaging and other services would get more users on its platform and help it compete with WhatsApp, which has over 200 million monthly active users in the country. According to last reported numbers - in January 2016 - Hike had 100 million registered users.

“Our goal - and the reason why the telcos have jumped on this - is to give a path to the Internet,” said Hike’s Mittal. “We are collectively trying to get people onto data because even the Total experience is better with data.”

“They see from their data - once people get hooked on, they spend more,” he added. Think of Hike Total as a gateway drug that’s designed to sell you a data pack - not that there's anything wrong with that.

What languages will Hike Total be available in? What version of Android is it built upon?
Hike Total has been built on top of Android Nougat. Given the nature of customisations done to the operating system, users shouldn’t expect to receive major software upgrades anytime soon (if at all) - but then Android smartphones at the price point don’t have a great track record when it comes to software upgrades, so users won’t be missing much.