Google has released its Mobile App Marketing Insights Asia Survey for 2016, carried out in cooperation with market research and information group TNS. The survey was carried out by TNS which polled 10,000 smartphone users, and the data that is presented is quite interesting. The biggest finding of the survey - contrary to both popular belief and the experience of companies active here - is that Indian users are the most likely in Asia to pay for digital goods and apps, with nearly 4 in 5 (77 percent) of those surveyed saying they've done this. 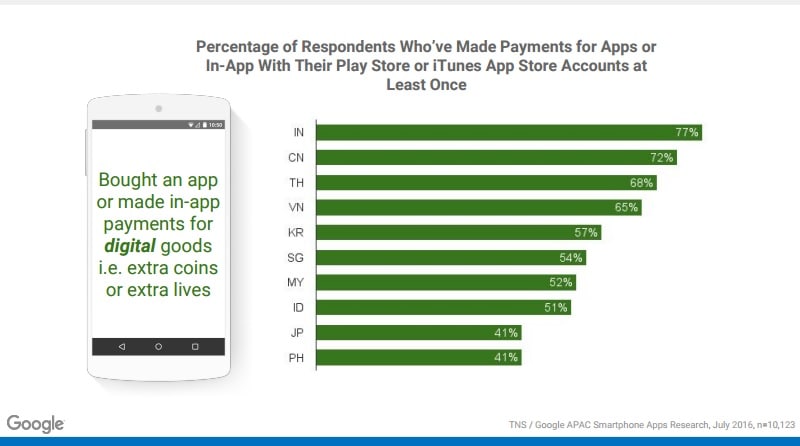 In other ways though, Indian users were pretty much along the expected norms for Asian users. For example, mobile users in India spent more time on the Web (62 mins) than on apps (44 mins). This number is not particularly high or low, and falls within the same band as the other countries from the region. Users from countries such as Korea have the most apps installed (53) while Indian users (33) are only ahead of their Thai counterparts (32).

However, it seems Indians use more of the apps we do have installed. Indians use 27 percent of their installed apps daily, while Koreans use only 21 percent of their apps every day. Doing the math, this means that Indians typically use nine apps per day, while Koreans use 11, so there isn't that much difference in usage, just in the number of apps.

App discovery in India works mostly through the recommendations of friends and family, but this is the case in almost all the countries that were surveyed. When it comes to installing the app, Indians (like the Japanese) care most about the star-rating. Korea, Japan, and Singapore also place a lot of importance on the price of the app; Indian users however care more about reviews, and the size of the app. 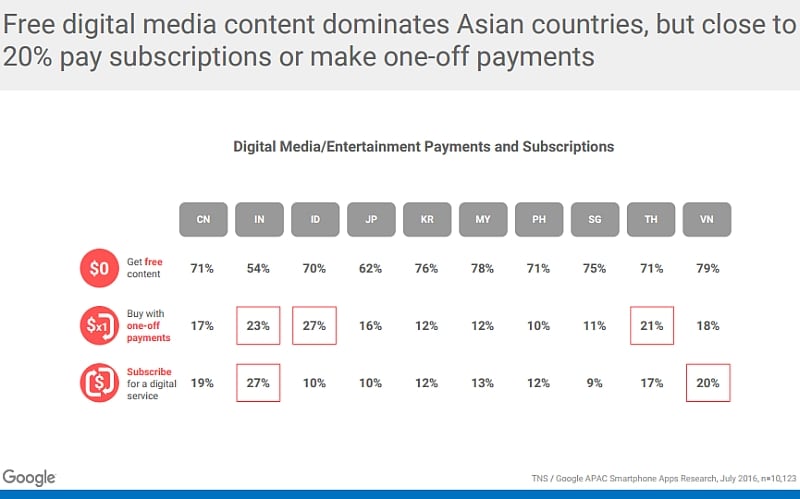 Money isn't a consideration, and in fact, Indians are the most likely to pay for an app or IAP, with 77 percent saying they've done so. We're followed by China at 72 percent, while Japan is at the bottom at 41 percent. What's more, only half the Indians (54 percent) surveyed said they exclusively consume free content, while for every other country (except Japan, at 62 percent) this number was between 70 and 80 percent. A whopping 1 in 5 Indians (23 percent) said they prefer to pay once and get their content, while 1 in 4 Indians (27 percent) say they subscribe to content. Again, these numbers were significantly high compared to other countries. Anecdotally, these facts seem out of sync with what we've come across in our own experience, but of course, the plural of anecdote is not data.

Indians were also overwhelmingly comfortable (86 percent) shopping for physical goods from apps, behind only China (89 percent) and far ahead of seemingly more "mature" markets - for example, the number in Japan is just 52 percent. Indian users are also much more likely to use the app instead of the mobile Web to compare prices, with 33 percent being app only in India while most of the other countries surveyed had the number close to 10 percent.

Of course, these numbers are far less surprising - "app only" deals are the norm in India, with even Amazon giving extra discounts if you shop using the app instead of the website. But what's interesting is that taking this extra effort to capture users in India might also pay off for companies, because of the next fact that was revealed in Google's survey. According to the survey, Indians are also much less inclined to turn off notifications from apps - only 22 percent said they've turned off notifications. In contrast, more developed countries such as Korea (48 percent), Singapore (49 percent) and Japan (49 percent) had nearly half the users turning off notifications. This means that if you've managed to become one of the 33 apps that an Indian user has installed, then you're much more likely to be able to engage with the user than if you're one of the 53 apps on a Korean phone. These reasons could help explain why Indian mobile users are much more likely to shop using their apps compared to other countries, despite other behaviours lining up with the rest of Asia.

According to the company, 10,000 users across all of Asia were polled - it did not give any countrywise breakup of this number, or how these users were selected.. The results in some cases do vary from the general perception and experience that others have had in the same market. Nonetheless, at face value, these results do paint an interesting picture of the Indian app market, and show that there is a lot of potential growth still to come.

Further reading: Mobile users, Mobile apps, Mobile marketing, Google, Apps, Survey
Gopal Sathe Email Gopal Gopal Sathe is the Editor of Gadgets 360. He has covered technology for 15 years. He has written about data use and privacy, and its use in politics. He has also written extensively about the latest devices, video games, and startups in India. Write to gopal@ndtv.com or get in touch on Twitter through his handle @gopalsathe with tips. More
Mumbai Comic Con Tickets, Dates, and What to Expect
Battlefield 1, Chance, and More: The Weekend Chill