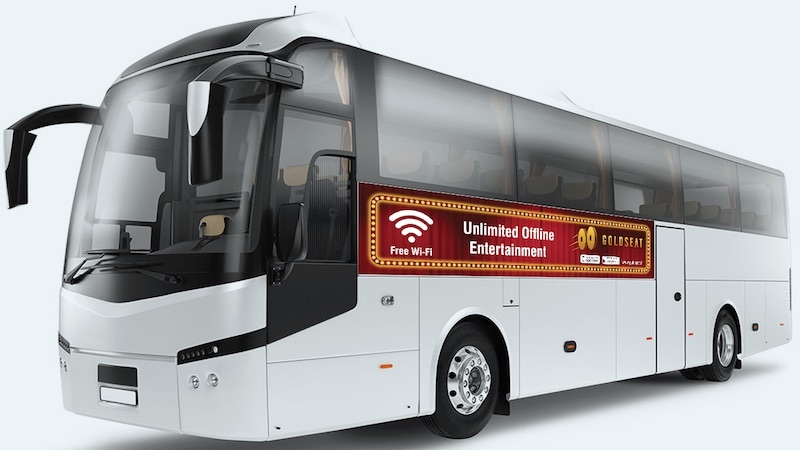 Various companies have tried over the years to bring in-flight entertainment style movies and TV shows to buses and trains, and by and large, have not caught on. Many of the companies in this space that we mentioned in 2015 no longer exist, but Gaurav Kapahi and Nishchal Khetarpal, two former HCL executives, believe that they've hit upon the formula to make travel entertainment streaming a success with their platform GoldSeat. They argue that with phones getting larger, and people getting used to consuming videos thanks to the Reliance Jio effect, the timing for a service like GoldSeat is just right.

The technology behind Delhi-based GoldSeat is pretty much what you'd expect. "We have a small, custom-designed media server placed on the bus with preloaded content, films, TV shows and all, which is then streamed to your phone through the GoldSeat app," explains Khetarpal. "It's a very light app, just 3MB, so you can even download it on the go. When you're on the road, connecting to the Internet can be a problem, and that's why we needed to keep the size as low as possible."

"Once the app is installed, the media content can then be streamed from our server to your phone," he continues. "All you need is a phone with Wi-Fi, and it doesn't matter if you're in some out of the way place, or going through a tunnel, the video will stream at 720p quality, with zero buffering."

That's not all GoldSeat is offering however. It's also using four different radios on the base-station to connect to the Internet across different networks, so the bus you're on can also offer Internet access along with local movies. "The way the device has been designed, it can work on up to four different networks at the same time, and once you connect to my Wi-Fi, we can provide Internet access as well, connecting you to whatever is the best network at that point. And it has built in load balancing to be able to serve 40 people at the same time," Khetarpal adds.

And how much will it cost? Nothing, perhaps, says Kapahi. The company can't share specifics of its deals with different bus companies, but according to him, GoldSeat sees this as a B2B service where it's providing the solution to the transport companies - it's up to them to decide how (or even if at all) to monetise it. Currently GoldSeat is partnered with a number of bus companies in the Northern and Western parts of India, but the vision is a lot bigger than that, with the next goal being to get on trains, and the Delhi Metro as well.

But to get there, it's going to have to first succeed in buses. One of the reasons why the duo believe they can make it work is because their stakeholders include content providers. "The licensed content we have is from Reliance, and Phantom films," explains Khetarpal. "There is a mix of new and old content, and for the next five years, all new productions of theirs will also show up on GoldSeat."

"Right now, there is only 10 to 15 percent 'new' content," Kapahi adds. "But this will keep changing. The mix of content is not ideal right now, but we're going to be increasing our catalogue soon. The good thing is that we didn't have to pay Reliance or Phantom, they came in early and invested in terms of content. And Film Companion, which is a behind the scenes kind of Bollywood show, they are giving us their content free because we are helping them to reach audiences in tier II and tier III cities. Going forward, we are also making some deals on a lump-sum or per-bus basis, but it's growing in a controlled manner."

The servers hold 500GB, and the contents are refreshed regularly. They're offered as a service, with the hardware, software, and content all bundled at a per bus per month cost. According to Kapahi, the per-device profitability arrives in just three months, although on a business level GoldSeat is still not profitable as it's pursuing growth, with a target of 500 buses ahead of entering trains. "An additional line of revenue, which is still to open up with us, would be ad revenue," Khetarpal adds, saying, "and also activities around the platform."

The challenge is that a lot of capital has to be tied up for growth. This is particularly true when looking at the in-flight entertainment avenue. Jet Airways has been rolling out its JetStream service, which allows passengers to access in-flight entertainment on select flights on their personal devices, much like what GoldSeat is offering. But why are so few options available in the air?

"The technology is the same on trains, and planes as well," says Khetarpal. "It's the same box that has to be fitted into a Rajdhani or the Delhi Metro, or an airliner. But the cost of deploying is much higher in the air because of all the certifications that are required."

"The cost of deploying the service in any airline is quite high," explains Kapahi. "The device that is placed inside the airplane needs an approval from two bodies in the US, saying that it does not interfere with the signals inside the plane, and is safe to use. It's a long process that takes 7-to-9 months, and it includes changes back and forth, so it's very expensive. The cost is a couple of crores, and you need to invest a certain amount per plane as well, so there's not been much deployment so far. The airlines are looking for a readymade solution, so they don't have to do all this."

"There's another important angle, which is the content angle," Khetarpal adds. "There is a cost for the content and if one airline was working on its own solution and its own content, it costs much more per passenger. A player like us with licenses to run that content across different airlines, and other modes of transport, makes it much more reasonable." Despite that, the cost makes it a challenge, and both men agree that the next step has to be 500 buses (or 20,000 passengers a day, as Khetarpal reminds us), and then in 2019, the Indian Railways and the Delhi Metro.