Five Reasons Why Timberman Is Not The New Flappy Bird

Ever since the unexpected popularity of Flappy Bird and its eventual withdrawal from the App Store and Google Play, people have been on the lookout for the next app that will take over mobile gaming. A flood of clones have tried to imitate the Flappy formula, in the hope of also replicating its success. The latest game that everyone seems to want to call "the next Flappy Bird" is a free new game called Timberman.

Timberman is a new indie-game made by developer Pawel Jedrysiak's company Digital Melody, available for free on the App Store and Google Play and after it was featured in the App Store's Best New Games section, it has been rising up the charts rapidly - it's got the top spot in the US App Store free chart, and between 500,000 and 1,000,000 downloads in Google Play. Much like Flappy Bird, the game is completely free, and ad-supported.

It's similar in a few other respects - the gameplay is incredibly simple, and the levels are randomly generated. Death is instant, and comes frustratingly often, but the game feels incredibly fair, and so people are encouraged to keep trying and improving their score. And much like Flappy Bird, here too, you'll roll your eyes when you look at the enormous scores on the leaderboard, and compare it against the 3 you scored in the last round. 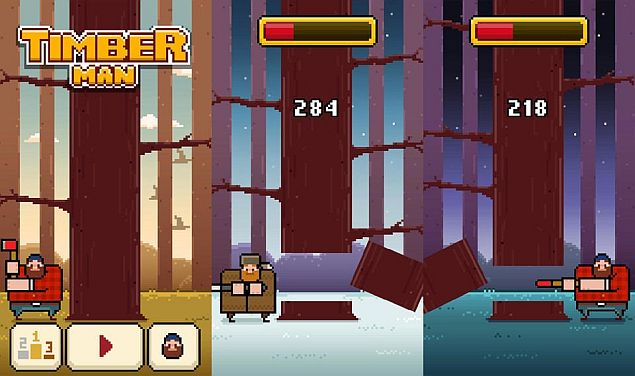 1. Art
At first glance, Timberman might remind one of Flappy Bird with its crude looking graphics and simple visual elements. There are only three things to look at in the game, not including the background. There's the huge tree trunk in the centre of the screen, your lumberjack, who has a choppy animation with each swing, and the branches on both sides of the tree that you must avoid. Each swing cuts out a big chunk of the tree that flies out, and the branches twirl off in an equally primitive fashion.

However, these choices look very deliberate. Flappy Bird's visuals were simple, and in fact, ugly. Timberman on the other hand looks great, and there's a lot of detail in all the visual elements.

2. Music
In Flappy Bird, the flap-flap sound that comes with each tap is the focus of the game until you hit something. In Timberman as well, each swing is accompanied with a tapping noise, and as you quickly swing, it quickly builds up to a dramatic percussion until a branch hits you and you die.

Timberman also has an excellent background track though, which starts off slow and builds up in tempo. That background score is going to be the cause of most of your deaths in the game, as the pace builds up and you instinctively try to keep up with it. It's wonderfully timed, and keeps the pressure building even though the game is at its core about time management.

3. Strategy
Timberman looks like a simple game, but there's more to it than quick reactions. In Timberman, each swing your lumberjack takes knocks out the lowest segment of the tree. You can cut it from either side, but each time you cut out a segment, the pieces above it come down by one level. There are branches on either side of the tree, so you need to keep cutting from the empty side.

Complicating things further is a timer which limits how many swings you get. But each swing also adds a little time to the clock - so you've got to balance maximum speed on easier sections, with a slightly slower approach on more complicated parts of the tree. You've got to build up time and then spend it carefully.

4. Pacing
One of the biggest distinguishing characteristics is the tempo of the two games. Flappy Bird's tempo never really changes - you might have to tap frantically at times to reach a high gap after a low one, but for the most part, the game has a very static pace.

Timberman on the other hand keeps shifting up its tempo. Like the gaps in the pipes in Flappy Bird, the frequency and location of the branches in Timberman is also random, but there are times when you'll see a clear run to the top on one side of the screen, so you can tap away at a hectic pace. At other times, you will have to slow down as the branches alternate between the two sides regularly, so you have to keep moving around carefully. As a result, the game can be frustrating, but it's rarely monotonous.

5. A paid version
One area where Flappy Bird wins over Timberman is in the placement of its ads. In Flappy Bird, the ads run as a banner that doesn't get in the way of the game. Timberman has a similar flow of play-die-play, but once in a while, the game will pause between rounds to display a full page ad. What's more, you can't dismiss the ad without hitting a small 'x' in the corner, which further slows you down.

That's why we'd heartily recommend that iOS users download the paid version, Timberman Golden instead - it is a $0.99 (Rs. 60) download, and it's the exact same game, but without any ads. It's a small price to pay, and the ad-free version has a much better rhythm that you will enjoy more.