Five Android Apps That Can Automatically Track Your Spending

One of the unexpected side effects of the demonetisation drive is that it's become a lot easier to track the money you're spending. With digital payments, everything is automatically documented - most wallets and banks send a SMS when you make a transaction - making it easier to automate your spend tracking. There are numerous apps that allow you to track your spending by reading your SMS texts, so that you can watch your budget without having to manually input any details whatsoever. We've written about one of these way back in 2014, but the space has seen evolved quite a bit since then. Here are our favourite automatic spend tracking apps that will be relevant for our readers in India. Since the apps require access to your messages to function, there are no iOS apps in this list.

MoneyView
MoneyView was on our 2014 list as well, and still remains a good pick today. It has new features such as an ATM finder, and a very simple and clean interface. The app reads your SMSes and figures out how much money you've spent, and where. It can also track your bank accounts and other accounts so you can get a deep dive into each account separately. 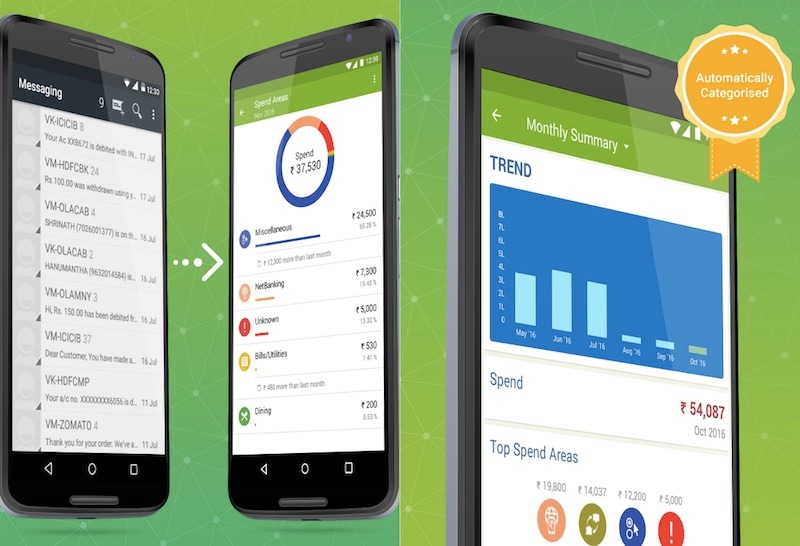 You get monthly trend figures, details on all spends, and highlights such as the top spend areas. This all happens automatically, and there's a feature that wasn't there earlier called Green Account which is supposed to help with your savings, though we stuck to the expense tracking.

Get MoneyView for Android.

Walnut
Walnut supports a number of useful features such as transferring money from your bank accounts to friends, locating ATMs, seeing due bills for credit cards and paying those bills, checking your bank balance, along with all your transactions. It breaks this into the various categories as you'd expect, and works really well. 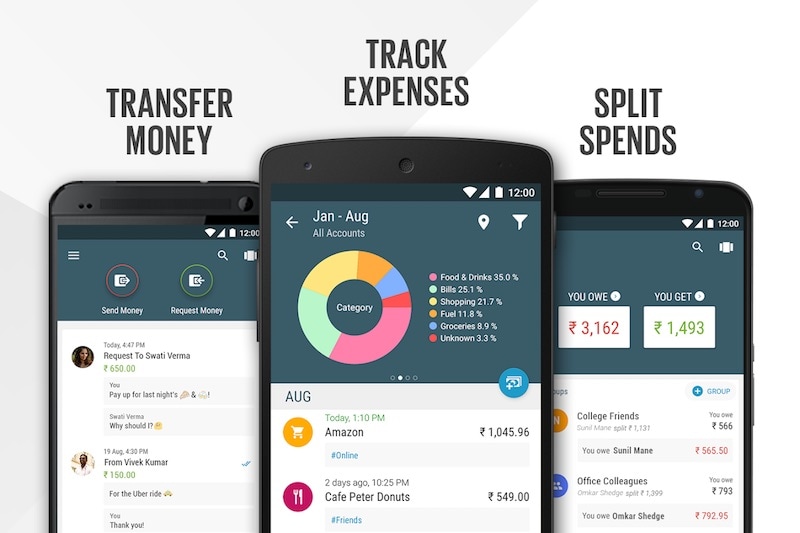 Add to this the fact that Walnut is one of the best looking apps in the category, that makes it easy to understand how you're spending your money, and you can see why we like the app.

Get Walnut for Android.

Gullak
Gullak started off as a pretty simple money manager, but today it has the option of creating reports with bill receipts for reimbursements, adding images to transactions, and more. At the same time, the automated SMS-based expense tracking also works reliably. According to the Play Store page, the app is also going to add features for local deals and discounts, and tax calculation and savings. 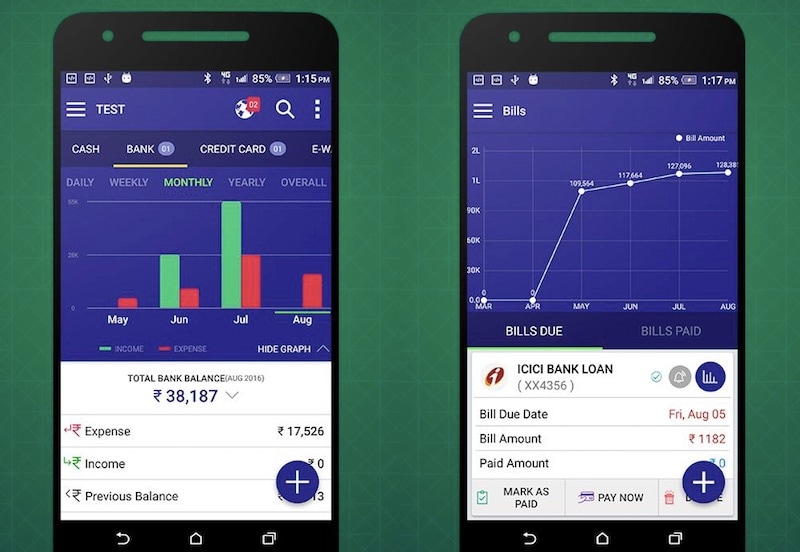 As of now, a couple of features we like are bill reminders, and budget limits, and splitting bills - in case a friend pays their share by cash. The one issue we have with the app is that it isn't as aesthetic as some of the others on this list, but if that doesn’t bother you, it's actually fast and easy to use.

Get Gullak for Android.

ET Money (formerly SmartSpends)
We first used this app back when it was called SmartSpends, and it was a lot simpler at the time. Today, ETMoney is not just an expense tracker, but a money manager that helps you to invest in mutual funds and save taxes. We used only the tracker though, and it still works pretty well. 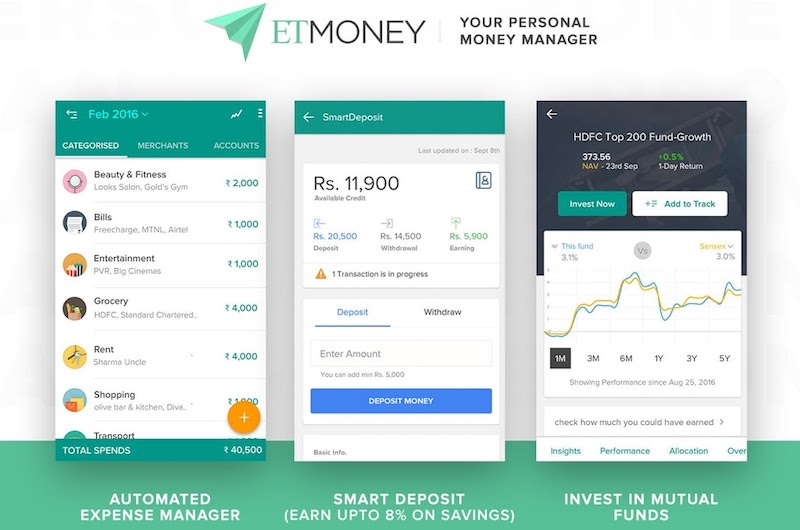 The automated expenses are based off your SMS texts, and categorised in a number of different buckets. The app also allows manual entry of spends. Apart from that, it also shows deals and discounts near you, so this could be a good choice for dealhunters, or people who are looking at more money-management features.

Get ETMoney for Android.

Finart
Finart believes that finance is an art - and it brings in a number of great looking visualisations to help you track your spending data. Like the other apps mentioned here, it also reads transactional messages from banks and wallets to build a picture of your spends, and allows you to manually enter data. 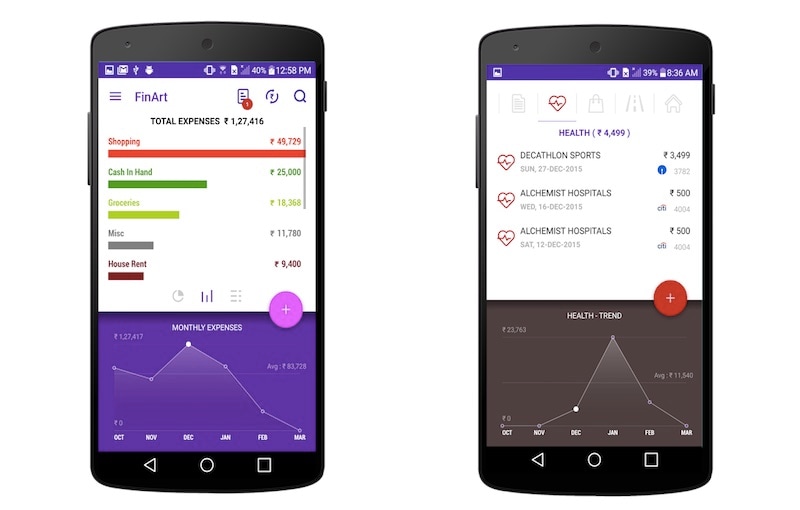 Its visualisations are easy to follow even if you're really bad with money, and it even works when you're offline, and does not have a login system, so none of your data is on the Internet. It also has a bill reminder, and supports multiple currencies so you can use it while traveling. One of the reasons we like this app though might be a little surprising. That's the fact that Finart is not free - it charges a yearly subscription of Rs. 199 - or less than Rs. 17 a month. That's a pretty reasonable fee, and the first month is free. This means there are no ads, or any annoying upselling.

Get Finart for Android.

A note on security
As you may have noticed, the apps mentioned above are free on Android, and they have access to your SMS inbox through which they can learn all your financial information. That's a combination that should make anyone at least slightly wary.

Every app here assures users that it does not store your data, nor read any personal messages, only transactional ones. The apps also have additional features, such as subscriptions and tax savers, through which they would earn money, so they're not just being given free. Even so, we would urge you to always carefully consider the pros and cons before installing any app that can read your personal information.

Further reading: Expense tracking, automation, smart apps, SMS, SMS based apps, Android Apps
Gopal Sathe Email Gopal Gopal Sathe is the Editor of Gadgets 360. He has covered technology for 15 years. He has written about data use and privacy, and its use in politics. He has also written extensively about the latest devices, video games, and startups in India. Write to gopal@ndtv.com or get in touch on Twitter through his handle @gopalsathe with tips. More
Indians May Soon Be Issued Chip-Enabled E-Passports
Google, NIELIT Aim to Train 1 Lakh Android Developers in India

Five Android Apps That Can Automatically Track Your Spending
Comment