Want a Coach to Help You Train for Endurance Races? This App Might Help

If the rise of apps such as HealthifyMe is any indicator, the fitness industry in India is going through a bit of a boom. A growing number of people want to get fit, and several apps now put them in touch with a personal trainer or a nutritionist, and even a gym nearby. Fitso is an Indian fitness startup that’s going beyond those things.

Fitso’s app offers services similar to what many others do, but the company has recently started an offline push. It’s doing this in three directions — running, swimming, and Ironman training. The Ironman Triathlon is one of the most gruelling races you can participate in today — it involves swimming 4km, cycling 180km, and running 42km in the same event, within a specific cut-off time.

Fitso is offering coaching for all of these activities in Delhi-NCR, and is targeting serious fitness enthusiasts.

Saurabh Aggarwal, who’s a co-founder at Fitso, told Gadgets 360, “When I was looking for swimming coaching, I went to several pools across Delhi-NCR but almost all of them refused to coach an adult.” Aggarwal wasn’t an ordinary swimming student either — his goal was to train for an Ironman race, which he first finished in 2014.

“The biggest challenge is to make them (owners of swimming pools) understand our requirements,” he says. “They do not understand that adults are there to train seriously for an event. People who are at zero today will be swimming for 1km in three months.” 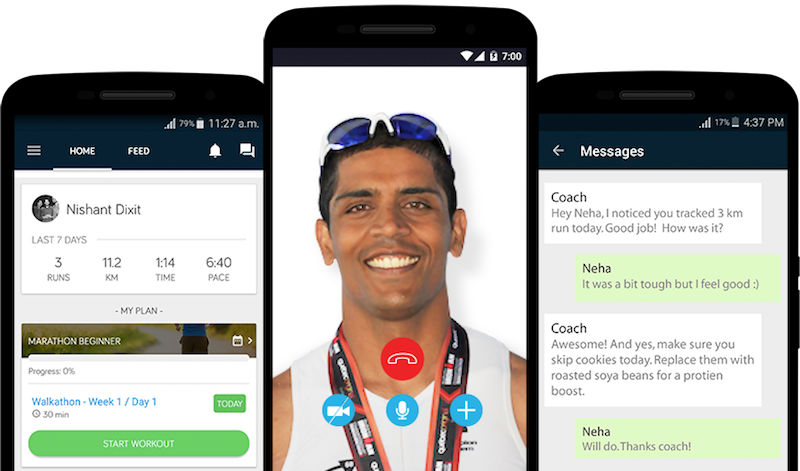 With typical apps, what you can do is book a session at a swimming pool, or a race track, but after that you're on your own. There are a few services that offer more training, via the apps, but these are also usually focused on the typical user, and don't cater to the specialised needs of people who are trying to train for competitive events. It is quite easy to find coaching to learn how to swim, finding coaching for competitive races is a lot harder. If you're not a professional athlete, getting this kind of guidance is extremely difficult.

Fitso is trying to address that gap in the market. Finding a personal trainer who can guide you through general workouts for overall fitness and weight loss is easy enough in most cities in India, but it’s not so easy to find one who understands the requirements of the sport you’re interested in. Fitso claims that it’s working with some of India’s best coaches for running, swimming, and cycling, and making it easy for people to get the training they want.

India has a growing number of runners and other amateur athletes, and many of these people rely exclusively on Facebook and WhatsApp groups to share their queries, training plans, and advice. There are some coaches in these groups and you sure can approach them here but an initiative like Fitso’s offline programme could make these coaches far more accessible.

As of now, Aggarwal says, 400 runners, over 100 swimmers, and 10 triathletes are training with Fitso. The company plans to expand this programme to Bengaluru first and then eventually to other metro cities in India.

However, Aggarwal concedes that Fitso’s primary business is going to be online. “The main volume of business is coming from our iOS and Android apps. That is our core business. Offline training is a side business for us,” he says. “This (offline programme) is something we will be making profitable and making it a premium quality service. The major part of our revenue will always come from people who are looking at weight loss.”

Fitso is betting on the fact that many people get into fitness because they want to lose weight and once they see results, they might want some personalised offline coaching to achieve their competitive race goals. With plans priced between Rs. 10,000 and Rs. 60,000 for six months depending on which sports you choose, it’s clear that not everyone can afford the company’s offline program. However, if you're at an advanced level, the pricing isn’t unreasonable at all, as long as the coaches are as good as Fitso claims.

Further reading: Fitness, Running, Swimming, Fitso, Android, iOS, Ironman, Cycling
Pranay Parab Email Pranay
Pranay is in charge of podcasts and videos at Gadgets 360. Over the years, he has written over 500 tutorials on iPhone, Android, Windows, and Mac. He has also written in-depth reported features on the intersection of technology and culture, reviewed fitness wearables, been the social media manager, started two podcasts, and produced several tech videos. He loves travelling, particularly to places not frequented by tourists. He keeps running half-marathons across the country and hopes to complete ...More
WWE’s The New Day on WWE 2K17 Ratings, Nintendo Switch, Starbucks, and a Whole Lot More