Duolingo is a popular platform for learning new languages with apps on Android, iOS, as well as Windows, apart from its website. The service has made learning simple and fun by gamification of the entire experience. Having earlier launched English-learning courses for speakers of Hindi and several other Indian languages, Duolingo has now released its Hindi course for English speakers. With the new course, the services aims to target tourists coming to India, learners who are looking to work in the country, and others generally interested in the Indian language.

Gadgets 360 caught up Kanan Gupta, the principal course creator behind Duolingo's Hindi course, to get some insights around the elements of the course and on how Duolingo plans to grow in India in the coming years.

"I've been associated with Duolingo since February 2016, and I started as a freelancer with them for user study," says Guptam, who also helped Duolingo create English course for Hindi speakers. "Eventually, after the English course was done - which we reinvented from scratch - they asked me if I would like to work on the Hindi course as well."

While work on the new Hindi course started officially in 2015, the course that has launched is the one Gupta started working on in July last year. "We decided we want to teach the language along with the script," he says.

The first three months went into researching what kind of vocabulary and grammar elements should go into the course. "From Sept to early Jan, we were implementing in the system, on Duolingo Incubator, then we locked the course and handed it over to the engineering team," says Gupta.

Since then, the Hindi course has undergone alpha testing, and is now available to all users via the Duolingo website. The course will be available via Duolingo's Android and iOS apps at a later date.

One of the major areas of concern, especially for a learning app, is the diminishing attention span among users. And, with a model like that of Duolingo, user retention is extremely tough.

"If the lessons are too long and the content is too much, users tend to drop out of the courses," says Gupta. "The lessons had to be kept just around the right length, because we can't even keep them too short. All the learning happens intrinsically, with translation on the go. We had to design the lessons in a way that learning seems thematic with a blend of vocabulary and grammar."

Designing the Hindi course
One of the major differentiators of Hindi as a language is the absence of articles A, An, and The.

"When teaching on a translation-based service, we have to give users a certain answer on how articles are supposed to be used," says Gupta. In the absence of definite articles, he says they had to take advantage of the indefinite alternative.

"The translation of the phrase 'A cat is an animal' would be 'Ek billi ek jaanwar hai' makes no sense," Gupta explains. "So, we alternated it with 'Billi jaanwar hoti hai' for most of the similar cases." For instances of definite articles, the workaround was that variations of hota would be omitted to make it appear like a definite statement. 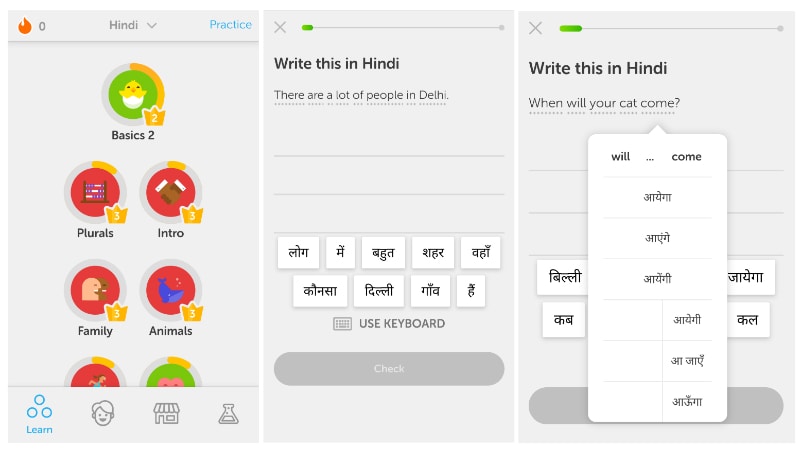 The Hindi course will be available on the mobile app at a later date.

"Everything is gendered in Hindi," he says. "I learnt a bit of German on Duolingo, and that is another example where every object is assigned a gender." According to Gupta, devising a simple way for users to judge the verbs, objects, and adjectives was one of the toughest aspects of creating the Hindi course. Add to that, using Devanagari script instead of the commonly used Latin script, on Duolingo, meant everything had to made from scratch, with little help from the internal team.

Focusing on India
Duolingo is optimistic about India. With over 10.1 million users in the country, India is among the service's top 10 largest markets worldwide. More than 2 out of 3 Indians on the platform, however, are on there to learn English. And typing in English is a hassle-free experience for most users, with most of the population making use of English language keyboards on their smartphones and computers. Hindi, however, represented a different challenge.

"There is a kind of [direct] correlation in India when it comes to English language skills and computer literacy," according to Gupta. "Not a lot of people know how to type in Hindi. We had to find ways around that. Instead of making typing in Hindi mandatory in the course, we used word bank to replace the need to typing in everything." The option of using a third-party Hindi keyboard is always there for users who want the additional convenience. 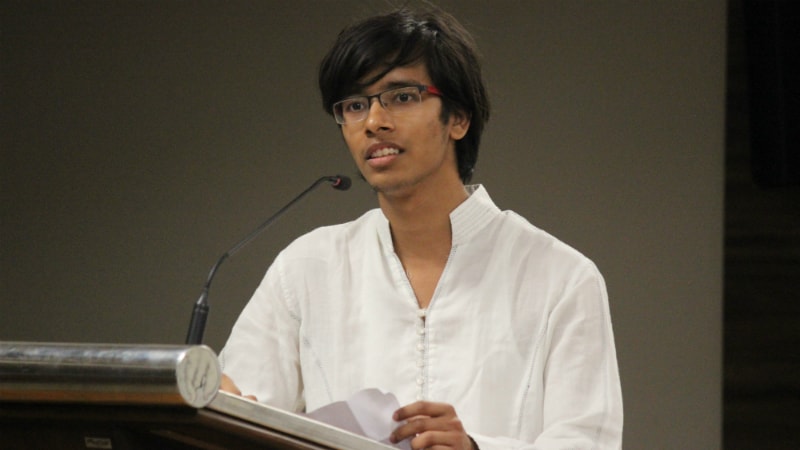 Having previously worked on the English course for Hindi readers, Gupta feels that challenges in the new Hindi course were more on the technical side. This is because Duolingo already knows the user patterns for English speakers on its platform. Comparatively, when developing the English course, challenges were about studying user behaviour.

From online to offline?
Offline is a big market for language courses in India, especially with the technological divide in tier-2 and tier-3 towns. We asked if Duolingo is considering tapping the offline market in India

"All the courses are gamified and are intended to be consumed at times like when you are waiting for a bus," says Gupta. "I'm not sure if this model would be suited for a proper language class." He, however, believes that Duolingo's tests can act as regular exercise tests of extensive courses taught at professional teaching institutions.

Gupta handled majority of the content creation for the Hindi course, but had the assistance of around 10 volunteers who helped in things like adding new sentences, translating, verifying for errors, alpha testing over different periods of its creation.

"I think we are going to get a lot more people from other countries than from India. This is because the course teaches Hindi at the communication level," says Gupta. "Let's say, if I talk in terms of CEFR [Common European Framework of Reference for Languages], it would go to A2 or B1 at this point this time." Duolingo is expected to expand to an advanced level in the coming months, based on user feedback, he explains.

Monetisation
While Duolingo's mission is providing everyone with free access to language education, its monetisation model consists of four elements. Incorporating advertising revenue into the mix, Duolingo shows ads at the end of each lesson. There are also in-app purchases for when you want to fix a broken daily streak, get some bonus lessons, or just splurge on new outfits for your avatar. A Duolingo Plus monthly subscription helps users experience an ad-free version with the ability to download lessons for offline use.

Interestingly, Duolingo currently offers two professional courses. The first one, called 'Duolingo for Schools', has been formulated for school teachers to use as activities in the classroom. Another product called Duolingo English Test (DET) is an English certification exam, primarily used by international students applying to US universities.

Claimed to be at par with IELTS and TOEFL, the DET costs $49, compared to $250 or more for traditional certification exam, a Duolingo spokesperson told Gadgets 360. The test is accepted by nearly 300 universities (including Yale, Columbia, NYU, UCLA) and that number grows each month. "India is among our top markets for test-takers," the spokesperson added.

What next after Hindi?
Hindi was an obvious first choice for Duolingo. The world's fourth most spoken language with over 500 million speakers worldwide seems like a good entry point for Duolingo into the wide array of Indian languages.

"We assume that our course will attract people living and working in India who want to learn Hindi, travelers to India who want to pick up the language, and people of Indian heritage in the US and other countries who want to reconnect with their roots," a Duolingo spokesperson said.

With the Hindi course launched, Duolingo is working on creating English courses for Bengali, Punjabi, Tamil, and Telugu learners. The company is focusing on Duolingo Incubator, a platform where bilingual volunteers come together to build new language courses. Once a team gets together and creates meaningful content, it can be submitted and possibly implemented on the platform.

"India is losing touch with its native languages," says Gupta. "Once I was reading a Hindi novel on a bus and my co-passenger gave me a strange look and was surprised about the fact that I knew how to read in Hindi. One thing that I'm hoping this would help Hindi achieve with this course is global status. Along with that, when people see others learning the language, I am hoping it will encourage them to learn their native languages as well."