Streaming Away COVID-19: How our Screens Kept us Occupied During the Lockdown

When Nainika got up, she signed into her live streaming fitness app for her Zumba class. Her first Zoom meeting was at 9am and before that, she needed some coffee. The recipe for Dalgona coffee looked simple on Instagram. She found a video on YouTube ‘How to remove stains for a mirror”. After finishing her assignment, she ended up spending the entire evening watching videos on how to avoid getting infected by coronavirus in Mumbai.

We are spending 3 hours and 41 minutes on our smartphones every day, according to an early insight report by Mobile Marketing Association (MMA) with Google. Incessant scrolling on our smartphones has replaced fidget spinners. YouTube, Facebook, Instagram, and other video streaming platforms grew between 40 to 120 percent during the early weeks of lockdown, according to the report. Netflix said that it saw record numbers of signups thanks to the lockdown, and other streaming services like Zee5 also saw 200 percent increase, as per surveys.

One of the most obvious beneficiaries was e-learning. With schools closed, all education has moved to Zoom calls and video lessons. E-learning giant BYJU's saw a 3x increase in the number of students on the app.

“We saw over 7.5 million new students learn on our app in the month of April,” said Vinay MR, Chief of Content, BYJU's. “Earlier, students used to spend two to three days per week on the platforms. Now, because of the lockdown, they are using the platform on a daily basis.” According to Next Education, an ed-tech company from Hyderabad, schools have widely accepted interactive online tools and live lectures, after the lockdown.

But beyond education, there's been a large scale shift in the way we've been streaming in the lockdown. YouTube said that since March 15, there was a 590 percent increase of average global daily uploads that had ‘at home' in the title compared to their average uploads for the rest of the year. Instagram Lives went up 60 percent in video views during the lockdown. 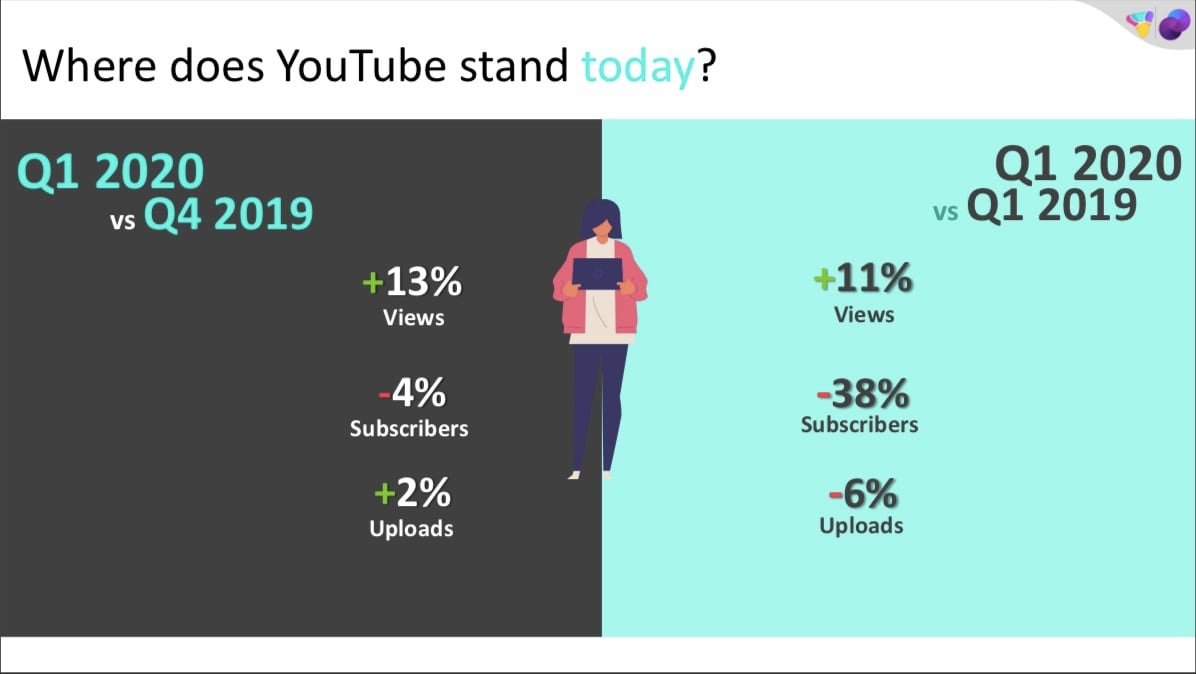 YouTube saw more uploads and more views during the lockdown.

“Culture has gone virtual in the new normal of social distancing, which can be seen in the rise in Facebook and Instagram Lives,” says Manish Chopra, Director and Head of Partnerships, Facebook India. Instagram saw a 60 percent rise in video views he added. “A lot of this is happening organically, as people are using our platforms to be more connected and engaged with their family and friends, but some are being curated by us too; be it the ‘Live In Your Living Room' series of Instagram Live music festivals, or the ‘I for India' concert on Facebook Live.”

According to YouTube, video titles around ‘Cook with me', ‘Clean with me' ‘Study with me' saw average daily views of videos increase by 600% since March 15 compared to the average views for the rest of the year. India was also looking for faster and ‘jugaad' ways of cooking. ‘Cake' was the most searched for food in India and saw a 4x jump. ‘KFC chicken and home' or ‘instant potato chips with Kabita's kitchen' and videos like these, saw a big jump too. In an emailed response, YouTube said, “It's probably because of two reasons: one, the inability to go outside and second, the boring routine that led to some comfort in food indulgence.”

Adarsh Munjal aka The Big Bhookad, a food blogger, said he found out Facebook was doing really well when it came to food videos. “Chefs, like Ranveer Brar, were putting out food content on Facebook, but it seemed like when it came to YouTube, women dominated the recipe video territory.” Munjal found his comfort in putting up “simple yet satisfying recipes” on Instagram. He said it was inspired by Matt Preston's cheat cooking, “This means simpler, easier, quicker recipes for the lazy and impatient souls - like me!”

“The worldwide lockdown has also led to a shift in audience behaviour, specifically in terms of demographic,” says Nishant Radia, co-founder online video analytics platform Vidooly. “For example, there has been a 20 percent jump in male viewership around baking/ desserts.”

On YouTube, fitness videos became 170 percent more popular with titles with the word ‘home', ‘no gym' compared to the prior daily average of the year. Ranveer Allahbadia, a popular fitness lifestyle YouTuber with 44 lakh subscribers across his two channels, better known as BeerBiceps, saw this swing early. “What I noticed with the surge of audiences coming in, the game was to put out videos consistently. During this time, on a bad week I would get 1500–1600 views, more than what I would get in a good week,” said Allahbadia. “People were looking for content around fitness, there was a hunger for infotainment content.”

Taking a cue from this trend and adapting furiously, is Curefit, a fitness company that decided to go online with their “LIVE” classes on their app. “Customers love workouts that are fun — our dance fitness classes serve that right for all users — beginners to advanced,” said Ekta Tibrewal, Head of Content, Curefit. “We have also just rolled out fun dance sessions for kids that both the parent and kids can do together. Vinyasa or Power Yoga is also quite popular among audiences.”

She added that while urban India dominates the audience for Curefit, Tier 2 and 3 cities are also loving the dance and yoga sessions. 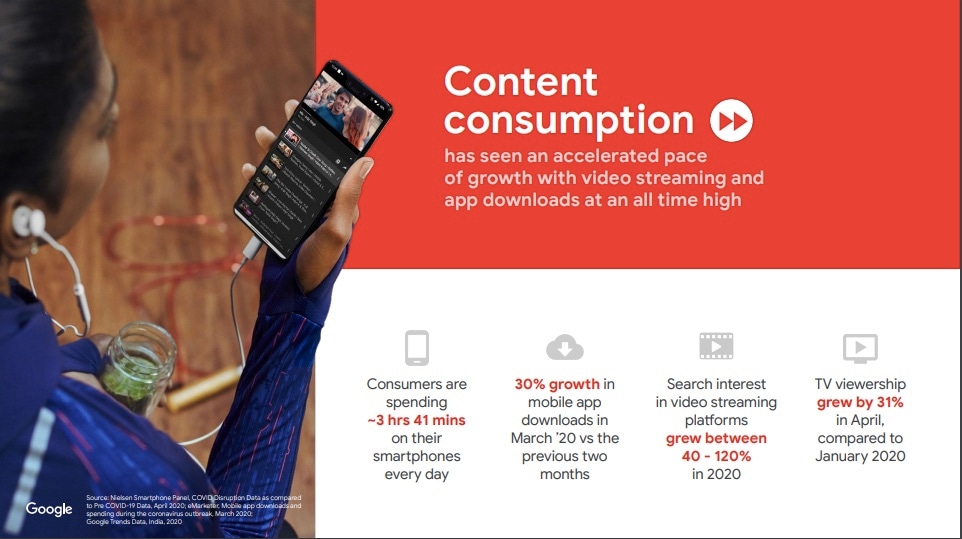 Video viewership in general has gone up significantly as per a report from Google and the Mobile Marketing Association.

A report by Vidooly and Mindshare found that news and politics secured the top position during March, displaying 2x growth from January. The appetite for news doubled on YouTube. Content creators like Dhruv Rathee and Madan Gowri who spoke about coronavirus, politics, and news saw a surge too.

The MMA and Google study said local content, especially in Hindi, Telugu, Kannada and Tamil, saw a big wave of viewers too. Gowri, a well-known Tamilian YouTuber who speaks on politics, said that viewership went up 60–70 percent on YouTube. Gowri spoke about China, coronavirus and Indian politics during this time from his hometown, Madurai. “I think I made a lot of videos on coronavirus because, after a while, audiences asked me to stop talking about it,” said Gowri.

How Ludo King Became a COVID Quarantine Sensation in India

App downloads for Rummy, Poker, Ludo King and old-world gaming apps increased and live-streaming of games, gameplays, walkthroughs, playoffs between popular gamers were on the most-viewed video list. PUBG and Garena Free Fire were some of the most popular games as well. This genre was dominated by men, with only 5 percent of those participating women, according to Vidooly.

Food and fitness did well on Facebook as well. “Content from public figures and creators make this apparent; Chefs Ranveer Brar and Saransh Goila were respectively doing their own series called ‘#RBLockdownCookbook' and ‘Mornings with Goila'. Even actors Kriti Sanon (#KriticalCooking) and Diljit Dosanjh are regularly showing their cooking pursuits,” said Manish Chopra from Facebook.

TikTok also pushed out in-app challenges around health and fitness, video memes, and working from home, and claims billions of views, although TikTok's measurements are relatively opaque. The other topics of in-app challenges were around education, food and fashion.

Both of them felt the pulse was with short videos and Instagram, where the organic growth and watch-times were unprecedented. Even micro, nano influencers were collaborating and putting up Instagram Lives. Sejal Kumar, a lifestyle content creator, also felt Instagram Lives had 2x the viewership. She made her videos on mental health and long-distance love stories. She made it to YouTube's trending list more than a couple of times, during this lockdown. Be YouNick laughed about how he created more videos during the lockdown than before.

Aditi Srivastava, co-founder Pocket Aces — a digital entertainment company behind live game streaming app Loco, YouTube channel FilterCopy, and the Netflix series Little Things — said that as soon as she heard about the lockdown, her team swiftly moved edit tools into her crew's house and got going. “It was a great time to deliver content and beat boredom. Brands that were counter-cyclical products like grocery apps, dating apps, ed-tech were reaching to advertise,” she added.

There was a similar trend in LinkedIn where there was a big wave of webinars and live videos. Soon, there will be video intros to your LinkedIn page. And meanwhile, even as restrictions lift and our lives get back to normal, the video viewing habits formed don't seem to be slipping away.

Streaming Away COVID-19: How our Screens Kept us Occupied During the Lockdown
Comment