The Best Keyboard App for Android and iPhone

Barring a few anomalies, the accepted design format of a smartphone today consists of a display that stretches to cover almost the entirety of the front, minus the space for a selfie camera, as it’s now known colloquially. So long, bezels and buttons. The reasons for that go beyond just the phone’s look – big screens are great for watching videos, playing games, and even browsing the web.

Nearly everything, it would seem. Because apart from not fitting nicely in your pockets – more women can attest to that pain than men – typing on these phones can also be tougher. Much more so if you’re trying with one hand. We’ve all been in situations where you find yourself having to type out a quick reply to a message with one hand, while having to juggle things in the other, be it shopping bags, coffee cups, or a baby. Though hopefully you're not literally juggling the last one.

Be it Android or iOS, there are endless third-party keyboards at your disposal, to alleviate the misery of such situations. Some of them are purely meant for the fastest typing experience, while others let you play around with GIFs and quick searches. You can get them from Google Play, or the App Store, and add them via the Settings app on your device.

Picking the best keyboard is a challenge - so much depends on your personal preferences, for one thing. Over the years though, we've tried out a lot of different keyboards, checking out the new releases as they came out, so we do have some perspective to offer.

For us, out of all the available options, there isn’t a single, obvious winner. Rather, it’s a tie between two. Your preference will depend on what you most require from your keyboard app, assuming you can shrug off the baggage of past allegiances. And with that, here are our top two. 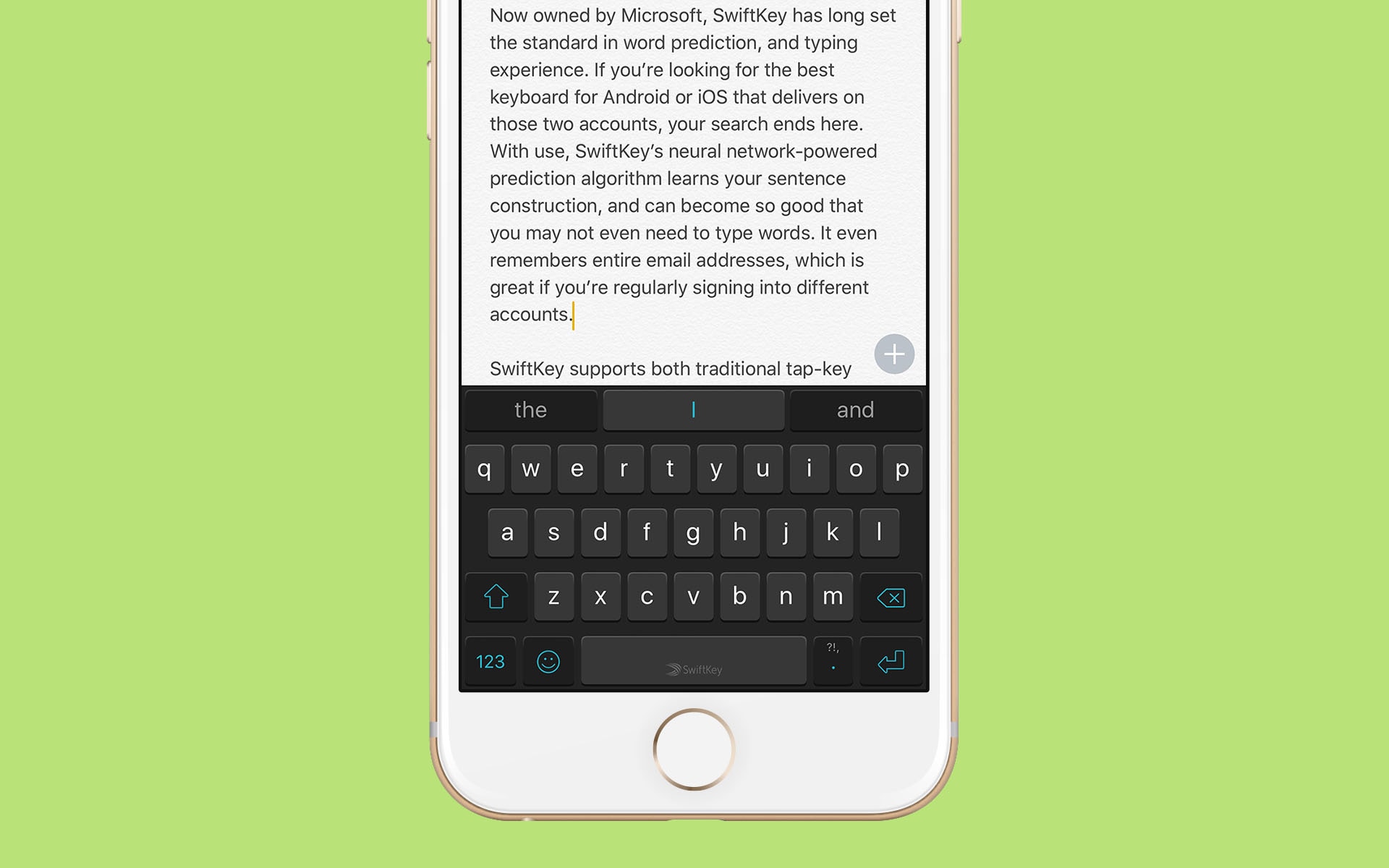 Now owned by Microsoft, SwiftKey has long set the standard in word prediction, and typing experience. If you’re looking for the best keyboard for Android or iOS that delivers on those two accounts, your search ends here. With use, SwiftKey’s neural network-powered prediction algorithm learns your sentence construction, and can become so good that you may not even need to type words. It even remembers entire email addresses, which is great if you’re regularly signing into different accounts.

SwiftKey supports both traditional tap-key typing, and modern gesture typing methods. The app has further improved on the former, by studying where exactly you tap in relation to the character you’re looking for. It then continuously adjusts the position of the keys, to facilitate your habits and take out any frustration that comes from having to look down at the keyboard. You can even see the personalisation for yourself – just look for ‘Tap Map’ in the app’s settings.

SwiftKey’s gesture typing is among the top-tier, as well. It suggests, and auto-completes, long words even as you’re only halfway through, and can be very useful when your other hand is busy. You can even give it access to Facebook, Twitter, Gmail, and your contacts, to personalise the predictions, so your social circle will show up when you’re using SwiftKey.

The jack of all trades: Gboard 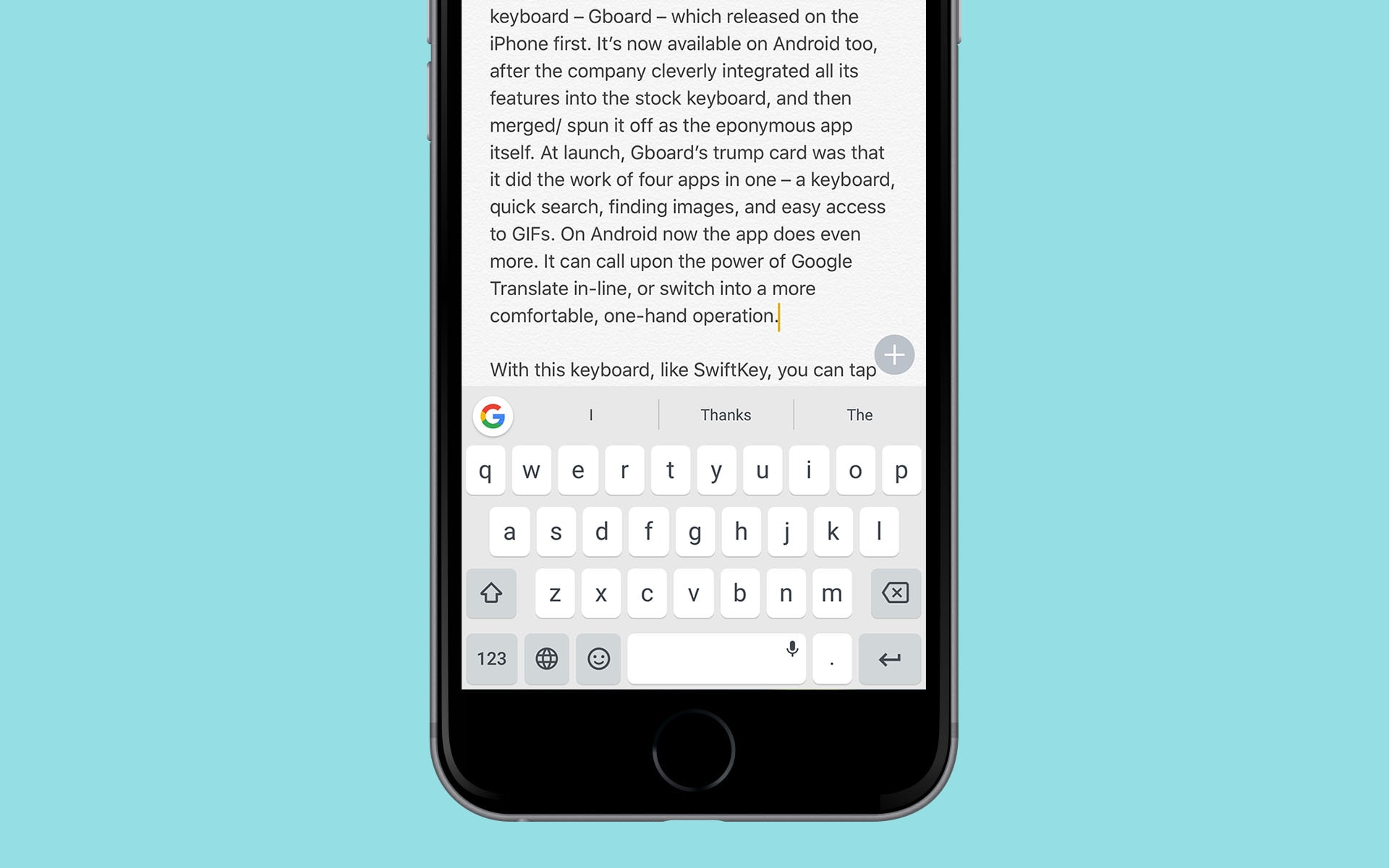 Google made a splash last year with its own keyboard – Gboard – which released on the iPhone first. It’s now available on Android too, after the company cleverly integrated all its features into the stock keyboard, and then merged/ spun it off as the eponymous app itself. At launch, Gboard’s trump card was that it did the work of four apps in one – a keyboard, quick search, finding images, and easy access to GIFs. On Android now the app does even more. It can call upon the power of Google Translate in-line, or switch into a more comfortable, one-hand operation.

With this keyboard, like SwiftKey, you can tap or swipe around to type. Search includes manual requests, and suggestions too. If you type in “Want to have lunch?”, Gboard will prompt you to look up restaurants near you. The GIF search pulls in images from all over the Internet, and you have the option to pick from popular terms – say “high five” or “mic drop” – or input your own. Gboard makes it so easy to do everything that we’ve missed its functionalities and snappy performance while using a PC.

Owing to restrictions placed by Apple (on iOS of course), Gboard couldn’t do voice typing when it arrived. Google has managed to creak out a solution, by launching the Google app if you hold down on the spacebar. It’s the farthest thing from convenient, but it does get the job done. Overall, be it on Android or the iPhone, it’s a huge plus for countries such as India, where Siri’s ability to properly understand different accents remains second-best to Google’s.

The others
Aside from SwiftKey and Gboard, there are tons of great options – specialists in their own way – that might charm you. For our usage, they can’t match the two titans, but they nonetheless managed to stand out in our extensive testing.

Its first iteration on iOS wasn’t stellar, but with an update that seemed to essentially copy Gboard’s best attributes, Microsoft’s Word Flow – born out of its experimental Garage division – turned into a worthwhile contender. The main selling point is its one-handed mode, dubbed Arc Mode by Microsoft, which converts the full keyboard into a quarter-circle.

Though that's a great feature, Word Flow feels less polished in most other aspects – image search surfaces unrelated results, emoji search is overly restrictive, and the typing experience isn’t optimal. Microsoft doesn’t seem to be fully committed with Word Flow, either. For one, it’s only on iOS, and even there it’s only available in the US App Store.

Microsoft says it won’t be coming to Android, as they will instead slowly integrate the most popular features into SwiftKey. It’s a good alternative for iPhone users, and that’s all it is.

The original gesture typing king has been around longer than most others, and it’s still a solid choice to this day. Swype has further built on that prowess over the years, adding some useful shortcuts along the way. The most useful among those remains its nifty way of adding special characters, which involves tracing your finger from a character key to the spacebar.

It takes a bit of time getting used to, but as any Swype veteran (us included) will tell you, it makes for a fantastic time-saver. So much so that you’ll likely never have to switch to the symbols panel with Swype. However, its word prediction can’t hit SwiftKey’s mastery, and it lacks in additional features that others such as Gboard and Word Flow pack, placing it in an awkward spot.

For what it’s worth, you can personalise Swype with a crowdsourced language model that will give you access to “hottest” words and phrases. It’s got bilingual support, and its own Dragon voice typing engine, though the latter feature is on Android only.

The app has always advertised itself as having the fastest, and most accurate, autocorrect system. And from the time we have spent with Fleksy, it’s been impressive. It’s so good in fact that you can completely look away from the screen – or have someone blindfold you – and still end up with recognisable sentences.

Fleksy complements that with its extension functionality, which allows you to pin features such as GIF search, a number row, or app launch hotkeys, right above the keyboard. Unfortunately, it lacks the highly useful gesture typing mode, which is great for one-handed typing outside.

Keyboard apps are all about personal priorities. In the case of Apple’s built-in iOS keyboard, you lose things like cloud-based word prediction, emoji search, or even gesture typing. On the face of it, that’s not appealing at all. What you gain in return is that QuickType is the only one with access to Apple’s voice dictation system.

If you’d rather talk and type on your iPhone, Apple’s own keyboard will appeal to you. In terms of features, you do get contextual word prediction, which means it will suggest different words on an iMessage conversation versus an email in Apple Mail.

The other advantage it has – thanks to Apple’s restrictions – is that third-party keyboards aren’t allowed in password fields, or on the lock-screen. With QuickType, you won’t need to worry about the forced switch, or the keyboard crashing on you now and then, despite Apple’s best efforts ever since it introduced the feature with iOS 8.

Further reading: Keyboard Apps, SwiftKey, Gboard, Android, iPhone, Word Flow, Microsoft, Swype, Fleksy, QuickType
Akhil Arora Email Akhil Akhil Arora covers entertainment for Gadgets 360, interviewing stars such as Christian Bale and Anurag Kashyap, covering series premieres, product and service launches across the globe, and looking at American blockbusters and Indian dramas from a global socio-political and feminist perspective. As a Rotten Tomatoes-certified film critic, Akhil has reviewed over 150 movies and TV shows in over half a decade at Gadgets 360. When he is not completely caught up with new film and TV releases, Akhil ...More
Snapdeal Being Prepped for Sale by SoftBank: Report
Uber Executive Said to Have 'No Basis' to Believe Criminal Probe Underway

The Best Keyboard App for Android and iPhone
Comment