As Uber Bows Out to Grab, Drivers and Riders Bemoan Loss of Choice 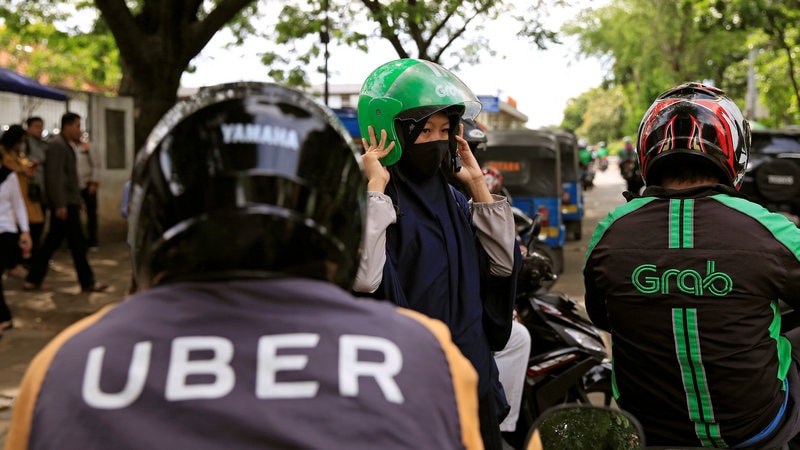 A mix of concern and disappointment met Uber Technologies's deal to sell its Southeast Asian business to bigger regional rival Grab, as drivers and users of the ride-hailing firms took in the prospect of sharply reduced competition.

The services throughout Asia have long relied on discounts and promotions for consumers and incentives for drivers, which made for tough competition, pushing down profit margins.

Grab said the Uber acquisition accelerated its path to profitability in its core transport business, as it would become the most cost-efficient Southeast Asian platform.

While drivers were split on which of the two services offered better compensation, they generally expected fares to go up with the reduced competition.

Rennu Mahajan, who has driven a combined three-and-a-half years for both companies in Singapore, said some of her driver friends were concerned because now they would not be able to switch to the other app.

"But I am personally not worried. I am quite confident that the fares will go up. If incentives don't go up, fares will increase and we will still get a little bit more," said Mahajan, 57.

On its Singapore website, Grab said passengers could expect better service with more drivers and transport options available on one app and that fares would not change. For drivers, it said the benefits and incentives structure remained the same.

According to mobile data analytics firm App Annie, Grab was ranked fifth among top apps based on monthly active users in Singapore in 2017 versus Uber at No. 7. In Indonesia, Go-Jek was at No. 9 just ahead of Grab.

Regulatory concern
Whether the merger would eliminate competition in Singapore will be the focus of government review, a spokeswoman for the Land Transport Authority said.

"We will ensure that no one single market player dominates the sector to the detriment of commuters and drivers," she said.

Malaysia's Land Transport Authority issued a similar statement, saying it "will work closely with relevant consumer and various regulatory agencies such as the Malaysia Competition Commission to safeguard passengers from unfair terms".

For both Ricky Tan, who has driven for Uber in Singapore for over a year, and Andre Pereira who uses both services, Grab's ability to exert greater control on prices was cause for concern as it may drive away customers to public transport.

"As the only app left, Grab can easily increase prices," Pereira, 24, said.

While there are smaller ride-hailing apps in each market, Grab and Uber have a presence across the region, while Indonesia's popular Go-Jek only operates within its home country.

Drivers in Cambodia, one of the last frontiers in the battle of apps, say competition is fierce and the market will not be easy for Grab.

Discounts and promotions
The apps have also grown in popularity in countries with fewer public transportation options, such as Vietnam.

Le Minh Quan, 30, who drives with both Grab and Uber in Vietnam, said: "Without competition they could enforce higher commission or reduce their support, and that's worrying. Before we had a choice, but now we don't."

"Whoever gives me discount codes I'll go with it, if not, I'll skip. So one down will just give me less option," he said.

In Thailand, ride-hailing services by privately owned vehicles are illegal but many drivers work with both Uber and Grab. There was no shortage of drivers and riders who liked the service that Grab had to offer.

"Grab provides enough promotions for my liking, and even if sometimes they don't, I don't mind paying the full price," said Choltanutkun Tun-atiruj, a magazine writer, who said she preferred Grab's services and relied on it in her everyday life.

"I prefer convenience and what's the quickest, easiest."