Arrow, Aviate, EverythingMe: Which Is the Best Smart Launcher for Android

One of the cool things about Android is that you can completely change the way your phone looks and works by simply installing a launcher. Not happy with how your phone handles the app drawer or the dock? There's no shortage of truly unique options. But while most of these launchers focus on how the phone looks, there are some which try and change how you use it, with the intelligent use of AI.

We recently tried out a number of the most popular of these "smart" launchers, and three really stood out - EverythingMe, Microsoft's Arrow, and Yahoo's Aviate. All three are free, and transform your homescreen in a way that promises to make using your phone more efficient. After spending a week with each, did any one of them actually live up to its claims, and become our default launcher? Read on to find out.

Aviate
Aviate launched to a lot of fanfare, and it's both smart and good looking. It automatically breaks your apps into screens for apps by category, contacts, and a smart stream that shows your agenda. It's very neatly laid out, and the smart stream shows things like nearby places of interest, upcoming events, and so on.

That's a little bit like the Google Now Launcher, but the app categorisation and presentation is much more readable, and you can easily find whatever it is that you're looking for. Swipe up to show your contacts, and see your most frequent contacts all in one place. 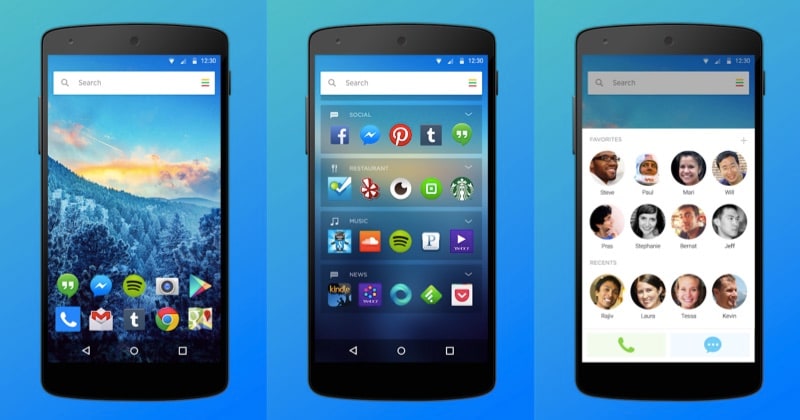 The stream changes through the day, showing weather, traffic, and calendar information, photos and tips for places of interest when you're on the move, and more.

On the downside, there's not too much manual control over how the home screens are organised, and what's more, things like the news feed are powered by Yahoo News, which may not appeal to all people. Although there's a lot to like about Aviate, you may end up feeling like you don't have enough control over your phone. It's not for everyone, but all in all, we liked Aviate, though it takes some getting used to, and the first day or so can be a little confusing.

Arrow
The second launcher we tried was Microsoft's Arrow, which actually has a lot in common with Aviate. Arrow is a good looking launcher with a search function that lets you easily find anything on your phone, that's a bit like Spotlight in iOS. It shows wallpapers powered by Bing, and lets you easily customise how your home screen looks.

Frequent apps are grouped together for easy access, and there's a page for recent apps as well; this makes it easy to find the apps that you want without having to sort your home screens, or search through the app drawer. The utility page also lets you track your documents, keep reminders, and more. In terms of personalisation, you can also adjust things like icon size, the grid, and choose between various personalised icons for apps, so Arrow does a good job of automatically beautifying your home screen, but also lets you feel in charge.

The automatic sorting isn't very extreme - it mostly tracks and shows you the things that you use the most. Over the course of a week, it become quite clear which apps don't get launched on your phone and helps you in paring down things you don't need. The calendar card shows your appointments, and you can see your Outlook contacts through the People card. The whole system works pretty flawlessly, and this was our favourite among the launchers we tried.

EverythingMe
We've tried EverythingMe (formerly Everything.me) a few times over the years, starting when it was still in beta and not officially available in India. The app has gotten consistently smarter, yet the original building blocks are still in place. The Smart Folders function is the crux of this app - it automatically figures out how your apps should be sorted and puts them into folders. The same app could be in multiple folders; for example, there are folders for food and for shopping, and an app like Zomato could end up in both.

That's not a mistake though - you think of apps in different contexts, and EverythingMe wants to have you focus on the context rather than the app. After you've spent a little time using it, EverythingMe will start to recommend apps that you can install in these folders, based on the things you use normally. 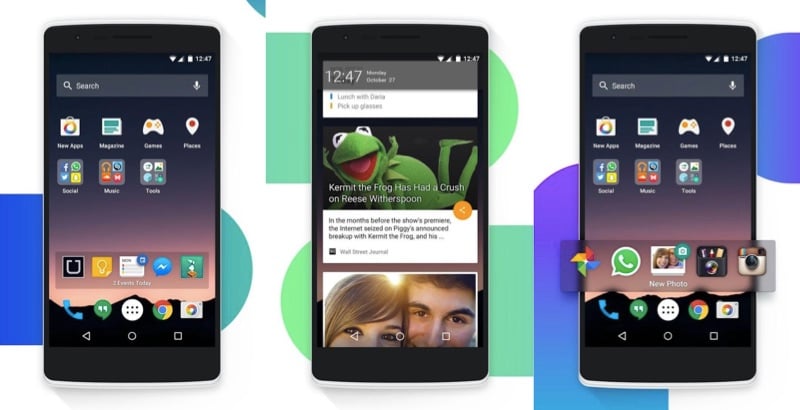 All your top contacts are sorted into a panel as well, and you have the option to search through your phone, while there's a widget called the context feed which shows things like missed calls, new files, calendar appointments, and more.

You can also customise the app to a degree, though in the course of testing, we found that even if we manually removed some apps from some folders, they would wind up back there later because the launcher thought they belonged. This isn't an issue, but it does take a little getting used to at first. Another area that could be improved is the app suggestions - while these are usually good, at times they can be irrelevant to the folder context, and at other times, they aren't relevant in India.

Despite these small niggles, we really liked EverythingMe, and think it's worth giving a shot.

Bonus
Apart from these three launchers, we tried a number of others for shorter spells as well, to varying degrees of success. Not all the launchers we tried were "smart", automatically arranging your home screen, but some of the others were. In the end, we felt that the others fell a little short of the bar set by these three apps in terms of ease of use, and the impact they had, but one app stood out as deserving of a mention even so. Evie Launcher is a beautiful launcher that makes it easy to access all your apps through a powerful search interface.

Evie is remarkably fast, and its minimal look is very appealing. The single home screen comes with just four apps on it by default, although you can add more apps and add a dock if you wish. Swiping down anywhere on the screen brings up the search function, while swiping up brings up the app drawer. Long pressing on app icons brings up additional functions, much like 3D Touch on iOS - for example, a long-press on Gmail brings up the compose button, and a long-press on Maps brings up Navigate to Home and Navigate to Work buttons. If you're looking for a minimal browser that works really fast, Evie would be our pick, but it doesn't do enough by way of smart personalisation to make the cut or this list.

Further reading: Android Customisation, Android Launchers, Smart launchers, Artificial Intelligence, Machine Learning, EverythingMe, Arrow Launcher, Aviate Launcher
Gopal Sathe Email Gopal
Gopal Sathe is the Editor of Gadgets 360. He has covered technology for 15 years. He has written about data use and privacy, and its use in politics. He has also written extensively about the latest devices, video games, and startups in India. Write to gopal@ndtv.com or get in touch on Twitter through his handle @gopalsathe with tips. More
Windows 10 Fall Creators Update to Offer Improved Privacy Features, Including App Permissions
Tesla Crash Shows Man and Machine Must Cooperate