Apps Go Beyond Selfies, With Live TV Broadcasts Starring You 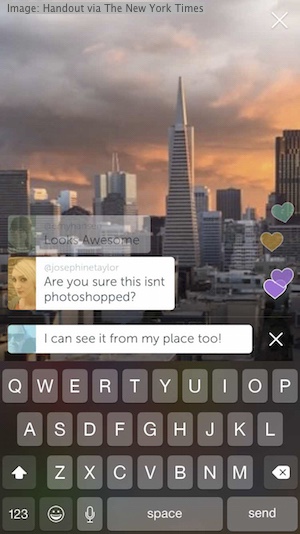 Tyra Banks smiled a toothy grin and chatted idly with a captive audience earlier this week, showing off her new pixie haircut. She later flipped a blond-streaked auburn lock at the crowd, asking in a half-mocking tone, "How do you like me now?"

Banks was not on the set of her daytime television show or modeling on the runway at New York Fashion Week. She was staring into her smartphone camera while using a test version of Periscope, a live-streaming video app that Twitter introduced on Thursday, one among a surge of such apps with names like Meerkat and Camio that are taking the social media world by storm.

The premise of Periscope, Meerkat and others is simple: Capture video of yourself doing anything from exploring a new city to playing with your dog, all using nothing more than your smartphone camera. The apps notify others that you are streaming live video of yourself, and you can share it with your friends and followers.

The concept is hardly novel and has resulted in numerous startup flops in the past. For years, entrepreneurs have tried to make live-streaming video catch on with the masses, with companies like YouNow, Justin.tv and Livestream offering their own takes on personal broadcasting.

But recently there has been something of a renaissance of live-streaming apps. And companies like Twitter and eager venture capitalists are spending millions of dollars on what they bet will be the next big thing to catch on with consumers.

"The world is way more ready for this than it was a year ago," said Kayvon Beykpour, chief executive and co-founder of Periscope, which Twitter acquired this year. "We have the benefit of entering this market when people are more sold on the idea of live broadcasting."

Driving the shift are technological advances and the ubiquity of smartphones, as well as years of people getting more comfortable with revealing information about themselves online through text and photos. With the new video apps, comedian Jimmy Fallon has live-streamed a monologue rehearsal for his late-night talk show, "Today" co-host Al Roker has broadcast the backstage hubbub at the morning show, and Silicon Valley venture capitalists have trained smartphone cameras on themselves when they engage in activities like taping podcasts or making presentations.

"All of a sudden, the world's pockets are full of good cameras and good screens with good data plans and good social platforms to let everyone know you're broadcasting," said Chris Sacca, founder and chairman of Lowercase Capital and an early Twitter investor.

In a statement, Banks said Periscope was a "wonderfully voyeuristic platform, and it boggles my mind that the things that I'm sharing are able to be experienced by others live."

Yet the current crop of live-streaming apps face a history of video app failures. Viddy, a video-capture startup that was a Facebook darling in 2012 and raised tens of millions of dollars, experienced early spikes in activity and at one point was seen as the "Instagram of video." Socialcam, a competitor, was looked at much the same way. Both apps fizzled or were acquired after consumer interest waned over the course of a summer.

That isn't preventing Twitter from betting big on the technology. The San Francisco-based company spent close to $100 million to acquire Periscope months ago, before the app had even been introduced, according to two people familiar with the matter. Dick Costolo, Twitter's chief executive, is particularly "obsessed" with using the app to capture real-time video, just as Twitter captures real-time conversations, these people said.

Beykpour said one advantage of Periscope was the short lag time between the stream and the ability to send text responses to the person streaming, essentially letting people communicate with the broadcaster in near real time. Periscope also takes advantage of a user's Twitter followers to rapidly build a potential audience, and the app suggests other active Periscope users as people to follow. In addition, the app lets users store videos for replay or sharing later.

Although Periscope operates independently of its corporate owner - much like the Twitter-owned short-form video app Vine - it has access to Twitter's money and technical support.

But Periscope has competition, including Camio and - in particular - Meerkat, which appeared this month and has gained traction with consumers and celebrities. In a matter of days after Meerkat was introduced, its use exploded and it soared to become the 177th most downloaded app in the United States and the 22nd most popular social networking app, according to App Annie, a mobile analytics firm. Meerkating, which describes the act of someone shooting a video live stream, is becoming a verb.

Much of that traction came from Meerkat's breakout popularity during South by Southwest, the technology and music conference held in Austin, Texas, this month, where a number of fledgling startups have gained momentum by creating buzz.

Periscope was under development for a year, but Twitter failed to quickly introduce and market the product after it bought the company in January, the people close to Twitter said. That let Meerkat swoop in to take the spotlight. About two weeks ago, Twitter restricted Meerkat's access to its social graph, which meant that a user's Twitter followers would not automatically show up in Meerkat.

Success for Ben Rubin, Meerkat's founder, did not come overnight. He is a founder of Yevvo, another live-streaming video app that made its debut in 2012 yet saw little traction. Eventually Yevvo rebranded itself Air, which also flopped.

Now investors are eager to fund Meerkat. The company said Thursday that it raised $14 million from the venture capital firm Greylock Partners and other investors including YouTube co-founder Chad Hurley and actor Jared Leto. In an online post, the Greylock partner Josh Elman said he invested in Meerkat because "it feels like we are at the dawn of a new era for live video."

"Think of the selfie culture these days," Rubin said. "Culturally, we've reached the point where cameras are more familiar and people have started to feel comfortable with video."

Live-streaming video has many applications, including for real-time news. On Thursday, during a fire at an apartment building in the East Village, numerous Twitter users live-streamed the event with Periscope and Meerkat.

For some users, live video streaming has now become almost a daily event.

"I like the random, serendipitous nature of it," said Ryan Hoover, founder of Product Hunt, a San Francisco-based startup that provides guidance on products from other startups. Hoover said he streamed himself using Meerkat two to three times a week and was an avid watcher of other people's videos.

He pointed to Jeff Needles, a friend from Twitter. Needles has recently hosted 24-hour "Meerathons," in which he streams himself on Meerkat around the clock.

Others entrepreneurs, like Justin Kan, have tried and failed in some forms of live-streaming personal video. His early startup Justin.tv was a 24/7 live feed of his own life.

"We weren't able to retain an audience because, really, we just weren't that interesting," Kan said in a recent interview. Eventually, he found success. Kan sold Twitch, a gaming-focused streaming startup, to Amazon for about $1 billion last year.

Live-streaming video also poses certain challenges. Some people do not wish to be recorded without their permission, something difficult to prohibit when everyone with a smartphone can freely stream video using the app.

At the startup incubator Y Combinator's demo day in Silicon Valley this week, audience members were told not to live-stream the presentations because doing so might violate rules prohibiting general solicitation for funding set forth by the Securities and Exchange Commission.

Live-streaming video's appeal to operators of sex cams is also obvious. Some of the apps offer settings, such as private broadcasting, that could promote the practice.

Beykpour, Periscope's co-founder, said that pornography violated the app's terms of service and anyone watching a video could report it for a violation.

"Our focus now is to keep it a safe place," he said.