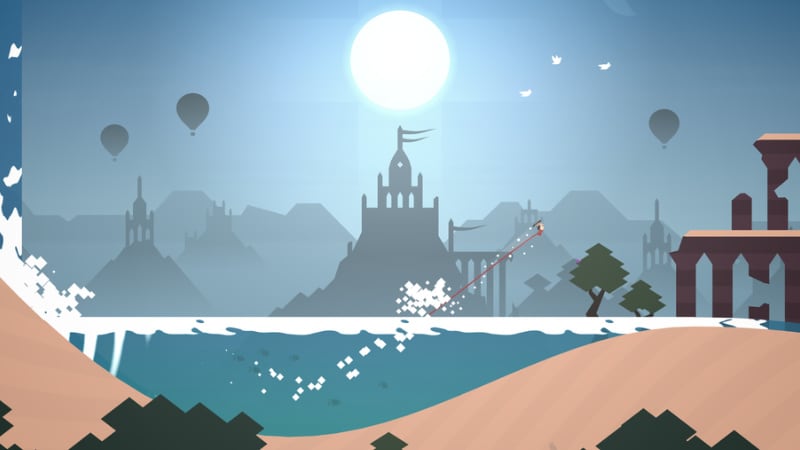 With a refreshing take on the endless runner genre, Alto’s Adventure proved that well-made premium mobile games can succeed in a marketplace that's dominated by freemium. Alto’s Adventure is an endless snowboarding game where you could land crazy trick combos while admiring the beautiful scenery and relaxing music. Team Alto, a collaboration between Snowman studio and Harry Nesbitt (Lead Artist and Programmer), has been hard at work on the sequel, which it views as a continuation of Alto’s journey. That game is Alto’s Odyssey.

Making a sequel is never easy, especially so if the sequel has to better a game as good as Alto’s Adventure. Team Alto was always aware of the challenge when it started making Alto’s Odyssey and the end result reflects that. Alto’s Odyssey uses similar gameplay mechanics to make players of the first game feel right at home, while still keeping them engaged via new locales, tricks, and lots of new environmental elements. At its heart is the story of Alto’s Odyssey, and Gadgets 360 spoke to key personnel behind the game over email to get a sense of the everything that went into making the game.

Ryan Cash, the founder of Snowman, says that the vision for a sequel existed before the first game was launched. “From my personal perspective, I had always wanted Alto’s Adventure to be the beginning of a story for our cast of characters that we could tell over many years,” he says. "As part of this, I’ve had my own ideas about where we might take these characters next for a long time. Even before the launch of Alto’s Adventure!”

The game's actual development cycle was heavily influenced by what was happening in the personal lives of Team Alto's members.

"Things really clicked when we reflected as a group on how much our lives had changed since the release of Alto’s Adventure The team had grown, some of us had moved away from the homes we knew to live in other places, and we had all experienced big personal upheaval in different ways,” he says. This feeling of upheaval is at the centre of Alto’s Odyssey.

“What we arrived at was a desire to capture the feeling of going outside your comfort zone, exploring the unfamiliar, and accepting that the concept of ‘home’ is related to the people close to you, not any one place. In many ways, this is what led us to the grandeur of Alto’s Odyssey’s setting,” Cash adds.

The game’s Lead Producer, Eli Cymet says, “We can say that Alto and his friends have discovered a majestic desert in a faraway land, and that the things they do and find there ultimately give them a greater appreciation for exploration, and embracing what awaits in the world beyond the comfort of their home.”

Alto’s Odyssey, just like Alto’s Adventure, feels more like a mindfully crafted experience rather than a mindless endless runner. As Cash puts it, “At every level, we approached the idea of a second title like a new experience in the same universe, not a sequel.” True to that, Team Alto decided to retain some of the characters from Alto’s Adventure.

“For us, one of the cornerstones of Alto’s implied narrative is the relationship he has with his friends and family,” says Eli Cymet, Lead Producer on Alto’s Odyssey. "In Alto’s Adventure, they encouraged him and helped him foster his love of exploration on his home mountain, and as players will discover in Alto’s Odyssey, there’s no other group of people he’d rather venture out into the wider world with.”

Alto’s Odyssey takes Alto and friends to various locales and explores more than just snowboarding. The game takes players through the desert, which means that it features sandboarding, a boardsport that’s similar to snowboarding.

“There’s sort of a vocabulary to the way you play the game that we’ve tried not to mess with,” says Harry Nesbitt, the game’s Lead Artist and Programmer. "We want coming to Odyssey to almost feel like returning to a familiar old friend.”

Sandboarding doesn’t change gameplay in any way, but it definitely adds to the variety of visuals and a cool new trick called wall ride. Nesbitt adds, “Then, on top of this, we gradually start to introduce new elements that hopefully complement and build on this core experience. I think players will be discovering new surprises for a long time to come.”

“There are a host of new core mechanics like wall riding, tornados, breakable grind rails and rushing water that give people new things to see and do every run. More than that, though, everything combines to offer an overall higher skill ceiling without diminishing accessibility,” Cymet explains.

One of the defining features of both Alto games has been the polish. Team Alto’s insistence on quality was one of the reasons behind Alto’s Adventure being delayed by 17 months and among the factors that delayed Alto’s Odyssey as well. Lead Artist and Programmer Harry Nesbitt says that development was quite challenging.

“There’s a lot more going in in this game – the number of game assets has more than tripled, and there’s much more variety of gameplay. In procedurally generated game, that can translate very quickly into chaos, so we’ve spent a huge part of the development process trying to tame that chaos, while still allowing things to interact in interesting ways,” he explains.

Nesbitt adds that many of the defining features of Alto’s Adventure came into being over several iterations and it was not easy to build a game that improves on it. “The first game was a sort of lightning in a bottle scenario, and now you’re trying to recapture that all over again. It’s definitely a challenge,” he adds.

When Team Alto was developing Alto’s Adventure many of the game’s standout features “happened quite naturally”, says Nesbitt, or as solutions to particular problems. The team says that they arrived at a ruleset for Alto’s Adventure after a long process and trying to apply it to the new features in Alto’s Odyssey was a challenging task. Lead Producer Cymet feels that the team made the right decision by delaying the game to “build things right”.

Alto’s Odyssey is launching as an App Store exclusive, which means Android gamers will have to wait for the game to arrive. That’s similar to the strategy the studio followed with Alto’s Adventure, which eventually released as a free-to-play game on Android. Team Alto told Gadgets 360 that it has nothing to share about the Android release at this point.

When asked about releasing the game on other platforms such as the Nintendo Switch, which appears to be a platform where Alto’s Odyssey would be right at home, Lead Producer Cymet says the Switch “is helping people ‘unlearn’ this idea of mobile experiences as inherently inferior, and in that regard, it’s a really exciting system.” However, he didn't say whether or not the game will eventually come to the Switch.

Whether that happens or not, it’s quite likely that mobile gamers will connect with Alto’s Odyssey just as they did with Adventure. “One of the greatest joys for us is seeing players connect with and insert themselves into this light narrative (the ‘plot’ and setting of Alto’s Adventure and Odyssey), and some of the best character flourishes in the Alto universe have come from the fan art we receive from players,” says Cymet.