14 Must Have Apps to Download on Your Brand New Mac

Bought a new computer? If that's a Mac and you've been a Windows user until now, then you might be feeling a little lost. The good news is that a lot of your favourite Windows programs now have Mac equivalents barring a few holdouts, such as Tally.

Every purchase of a new Mac also includes some useful apps like Keynote, Pages, Numbers for office productivity, and Garageband, iMovie and Photos to cater to your multimedia needs, which helps you get started.

The Gadgets 360 team has a fair share of macOS users, and we're here to help you get started with your new Mac. We’ve compiled a list of must-have apps that you should consider installing on your Mac. We've got everything from the basic apps everyone requires, to specific ones that fill more advanced roles. Here are our picks.

1) Skitch by Evernote
Although the built-in Preview app on macOS supports basic annotation such as adding arrows and lines to an existing image, Skitch lets you do more. For instance, it’s got a larger variety of symbols that you can annotate your images with. There’s also a highlighter tool you can use to put focus on certain areas. You can also pixelate sensitive portions of an image before sharing. Next, you can take a timed screenshot. After working on the image, Skitch can export it in popular formats like PNG, JPG, PDF etc. If you share a lot of images on social media, Skitch will soon be your go-to tool.

2) Google Photos Backup
Google Photos is an incredible service that backs up and intelligently organises your photos for free. You may have years and years of photos stored in portable drives that you’ll want to back up somewhere more reliably. Fortunately, Google has made a simple tool that runs in the background and backs up photos from all the folders you choose. Any photos you add at a later date will also be backed up seamlessly.

Get Google Photos Backup From The Official Website (Free)

3) WhatsApp
Although your Mac comes with iMessage built-in to talk to other Apple users, WhatsApp is ubiquitous across platforms. In 2015, the Facebook-owned service finally released a web client that could be accessed from computers. This year, it made native apps for the desktop, including macOS.

Although the experience isn’t largely different from logging into WhatsApp Web, there are a couple of advantages. For one, you can use the cmd-Tab keyboard shortcut to jump between your WhatsApp conversations and other apps. The second advantage is that since it’s an app, notifications are better categorised in macOS’ Notification Centre. Other messengers such as Telegram also have their own Mac apps which you can download if you use the service. Lastly, Twitter for Mac is a good app to have, if you're an active user of the social network.

4) MonthlyCal
Aside from being a home for incoming notifications, the Notification Center also serves as a place to access useful widgets. A two-finger swipe from the right corner of the trackpad can reveal built-in widgets such as weather, world clock, iTunes media controls, calendar entries, and so on. Unfortunately, there’s nothing built-in to show a monthly view of the calendar. MonthlyCal is a third-party widget that does just that. It costs just Rs. 60 and you can customise it's look to your heart's content. It’s one of those things most people would love to have. 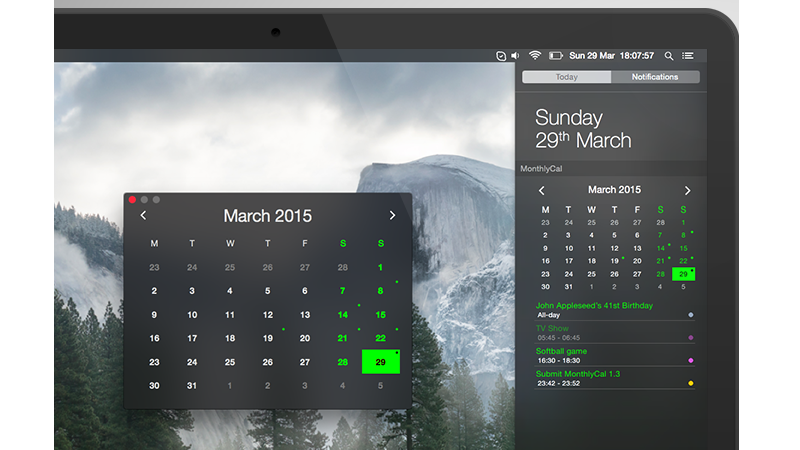 5) f.lux
In iOS 9.3, Apple introduced a feature called Night Shift, which tweaks the colours on the screen at night to avoid eye strain. This feature is now a standard on most smartphones, including many Android phones. But f.lux has been doing the same thing on PCs since 2009. Once you install the Mac app it automatically changes the colour temperature of the screen depending upon the time of the day. It makes the screen yellowish after sunset, and supposedly can even improve sleeping patterns, if you’re the kinds who stares at the computer screen after dark. If the screen is too yellow for you, there is a manual mode where you can customise the intensity to your liking.

(Also see: How to Prevent Eye Strain When Using a Computer)

6) Android File Transfer
If - like many of us - you prefer using Android over iOS, this app will come in handy with your Mac. Although most content these days is parked on the cloud, there may be large files (like videos) that you’d might want to transfer the old fashioned way, by using a USB cable.

With Windows, that worked automatically, and you'd just use Windows Explorer to transfer files directly. Mac users on the other hand have to use this Google-made tool called Android File Transfer. With it, you can access the internal memory and the microSD card inside your phone, to copy files to-and-fro and delete unwanted stuff.

7) VLC Player
The famous video player that is able to play almost any video file on the planet is available for the Mac too. It's useful to have VLC because every video format isn't playable via the built-in QuickTime app. And if, for some reason, a particular file isn't playing on VLC, you could give Movist a try.

8) Spark
Spark is a popular email client for iOS that was recently launched for the Mac. Some advantages over Apple’s built-in Mail app are natural language search, smart notifications, instant signature toggling, quick replies, and so on. The app smartly organises emails it thinks are important to you, and is considerate about not bombarding you with too many notifications. Not to mention the app looks pretty good too. 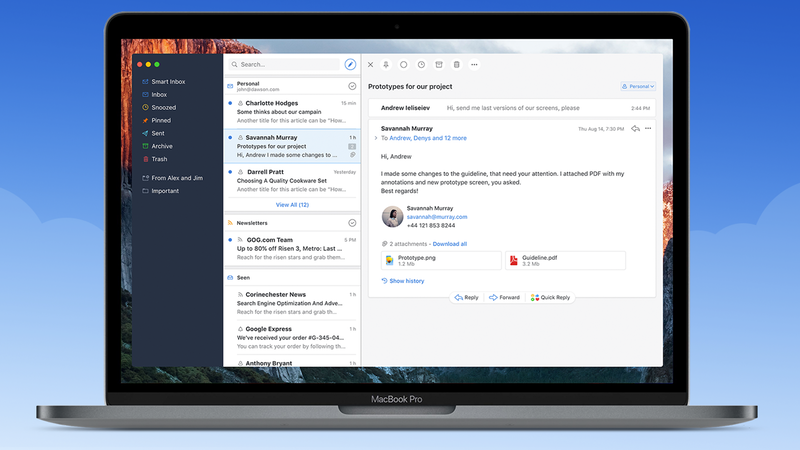 9) Transmission
If you intend to download files over the internet using the BitTorrent protocol, then Transmission is a lean, easy to use client. On it's official site, it is stated that this app is a volunteer-driven open source project, with no intention to use ads or any other monetisation techniques.

10) Pixelmator
While Preview on the Mac supports basic image editing like cropping and resizing, it falls short if you want to do anything more. However, you can do without a big-name app like Photoshop.

Pixelmator is a reasonably priced image editor that’s built from the ground up for macOS. It’s great for adding finesse to existing images, or creating a new one by stitching multiple images together. Pixelmator is typically sold for $29.99 (roughly Rs. 1,800 on the India store) but occasionally goes on sale for half the price multiple times during the year. You can track the price drop using tools such as AppShopper.

11) 1Password
With all the rampant hacking news we read, one of the basic things users can do to protect themselves, is to keep strong passwords and avoid the use of the same password on multiple services. But considering the hundreds of services that an average Internet user is subscribed to, it is hard to remember all those randomised passwords. This is where password managers can help - and 1Password has been the premier password manager for years.

Simply put, 1Password generates random strings that can be assigned as passwords for different services, remembers them and autofills them with a quick shortcut. The beauty of this app, unlike Apple’s built-in Keychain tool, is that it locks it all using a single master password. You can also store other things like credit cards, notes, and software licence codes. 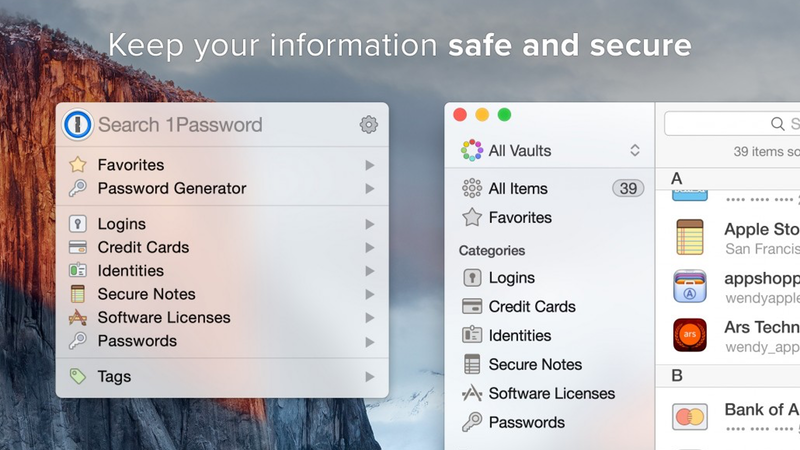 Other than macOS, 1Password is available for every popular platform like Windows, iOS and Android, and there’s a Web client too, if required. The only thing that might put you off this otherwise fantastic tool is the price - a whopping Rs. 4,000 as a one-time fee for the Mac app (apps for other platforms are sold separately). However, the app does get seasonal discounts from time to time (as mentioned before, you can use AppShopper to track price drops).

If you don’t want to pay upfront, you can opt for a monthly subscription fee of $3 (roughly Rs. 200) per month to use the app on all platforms. There’s also a family pack of $5 (roughly Rs. 340) per month that can be shared among five people. Alternatively, there’s also LastPass, which recently dropped the $1 (roughy Rs. 67) per month charge to use the service on multiple platforms, thereby making it virtually free for basic password management.

12) iA Writer
If you end up writing a lot on your PC, iA Writer is a popular writing tool for the Mac. It has a simple, distraction-free interface, pleasant fonts, and supports the Markdown format. It also has this nice ‘Focus Mode’ that puts the spotlight on the line or paragraph you’re going through, fading out everything else. Other than support for macOS and iOS, iA Writer is available for Android too. This means that you can move across devices without having to change your tools, which is a big plus.

On the other hand, if you're exclusively writing on your Mac, then there are some other options you can consider. If you want a finer writing experience and are willing to pay more, Ulysses is the most applauded writing tool for Mac and iOS.

13) SuperDuper!
Although Time Machine is a decent way to backup files on your Mac, SuperDuper! is a more functional alternative. It creates a bootable backup of your computer, so if your Mac ever stops working (or say, is lost), you can connect the SuperDuper backup drive to another Mac, and it will boot into your system as if it was your own. This could be a critical tool for somebody who just cannot miss any moment without their computer. Alternatively, Carbon Copy Cleaner is a similar app with a 30-day trial, but the basic backup feature works even after the trial expires.

14) Paragon NTFS for Mac
This happens to almost every Mac user - they connect an external hard drive only to realise that they can't copy files to it. This is because the hard drive in all probability is formatted as NTFS, a format that's ready-only on macOS by default. There are a few ways to get around this. You could download Paragon NTFS for Mac, that enables writing to NTFS-formatted drives on a Mac. The software makers offer a 10-day free trial, after which you'll have to pay.

Another option is to format the drives to the exFAT format, which supports reading and writing both Mac and Windows, but if you don't have the option of doing that, you'll need a software such as Paragon NTFS.

Bonus
Giphy Capture is a nifty tool to create GIFs out of anything happening on the screen. Alfred is an advanced replacement to Spotlight universal search, that also enables doing things like quickly searching for stuff on Google (Spotlight doesn't do that), but it doesn't do some things that Spotlight can (like perform quick currency calculations). If somebody sends you a RAR file, there's RAR Expander to 'unRAR' those files. Finally, there's the Ka-Block extension for Safari to block ads and third-party user tracking scripts on websites.

This was our exhaustive list of apps that you should install on your Mac. Do you have any other recommendations? Share it with the world via the comments below.