WhatsApp, the messaging platform that cost Facebook $19 billion dollars when it was acquired back in 2014, remains the most-used IM service with its parent's own platform - Messenger - following suit. And while you (probably) use it every day, there might still be some things that you don't know about its operations or what you can do inside the app. Here are ten things you likely don't know about WhatsApp:

1. 1 billion downloads with 5 people
The messaging service hit the 1 billion downloads mark on Android back in March last year, and WhatsApp co-founder and CEO Jan Koum posted in response that the team working on the Android version was just five people in total.

Facebook turned me down. It was a great opportunity to connect with some fantastic people. Looking forward to life's next adventure.

Got denied by Twitter HQ. That's ok. Would have been a long commute.

3. You can use WhatsApp to compress images and videos
Sure you could use a dedicated photo editing app to do that, but this works great for a quick fix if you don't mind the drop in quality. Send the set of pictures and video files to one of your friends (or yourself) via WhatsApp, and then head over to the WhatsApp Media folder on Android or your Camera Roll on iOS to find the compressed versions. You can delete the originals to save space, or share the compressed images or videos through some other if you prefer.

5. Type "whatsapp://send?text=HELLO" in browser address bar
The messaging service has its Web protocol as well, which is used by most websites to create a WhatsApp share feature. If the phone has WhatsApp installed, typing the text above into your browser should open WhatsApp and ask you to choose a contact to send the message to. You can customise the message by replacing the word "HELLO" with whatever message you'd like to send. Put in a little though and it could be a good way to prank friends into sending messages they didn't mean to.

7. Custom notifications for any contact or group
Right now, pretty much every message you get on WhatsApp probably sends the same notification, right? So the only way of knowing if it's something important is to check your phone every time a message comes. But there's a better way of doing things. You can set up custom message sounds, ringtones, vibrating patterns and pop-ups for your WhatsApp contacts and groups, depending on what device you're using. iOS is the more restrictive one, allowing for only sounds and ringtones. On Android, you can do all four - even going so far as to choose any sound file for calls, picking between short or long vibrations, and so on. This means that you can have different notifications for your work groups, your friends, and your family.

8. Text formatting - bold, italics and strike-through
Since March, WhatsApp for Android and iOS has supported basic text formatting as well in quite simple fashion, by enclosing your message in asterisks for bold, underscores for italics, and tildes for strikethrough. You can also combine any of the three for a multi-formatted experience. 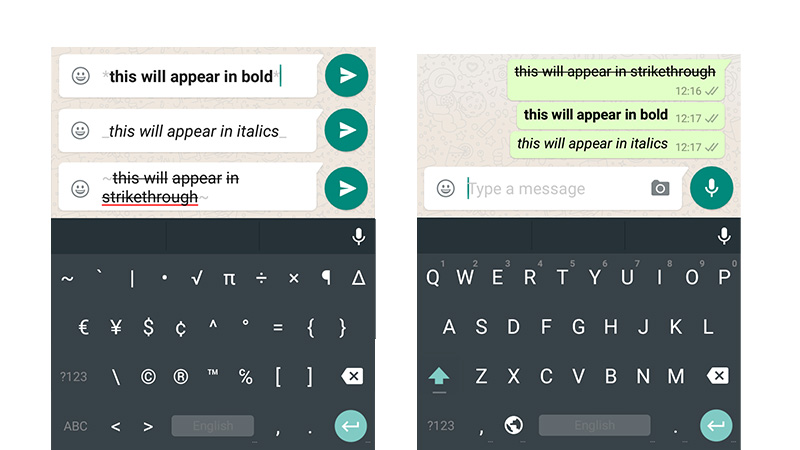 9. WhatsApp doesn't store user data
The reason WhatsApp Web needs your phone and its corresponding data services to work is because the company doesn't provide server storage for your messages, unlike Facebook Messenger or Skype. All the server maintains is a queue of your undelivered messages. Once a message gets delivered to your device, there's nothing left back on the servers. You can of course backup and restore your messages via Google Drive or iCloud.

10. WhatsApp provides 256-bit end-to-end encryption
Developed by Open Whisper Systems - whose encryption protocol has been used by famed messaging tool Signal for years - all messages sent and received through WhatsApp are now encrypted end-to-end which means hackers or oppressive regimes cannot breach your privacy. This move has thrust WhatsApp into the legal world limelight since then, since it means that messages cannot be lawfully intercepted either.