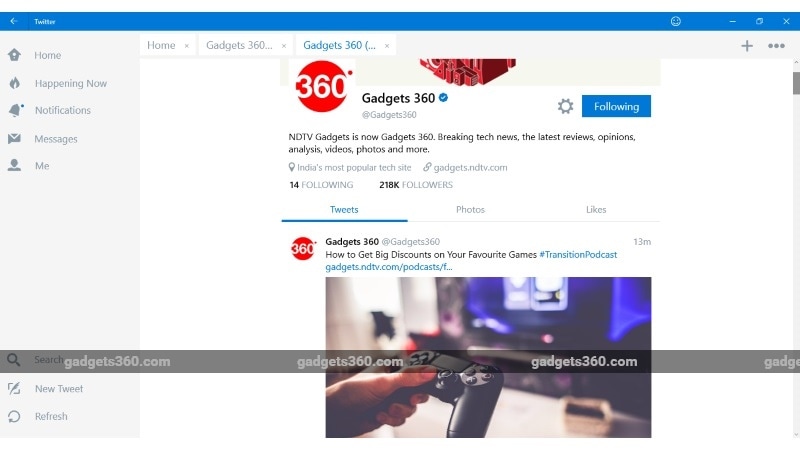 Twitter's Windows 10 app has now received a useful feature with its latest update as the company has now added Tabs to make it more like TweetDeck. Apart from the Tabs, with the latest update, pinned tweets can now be viewed and created inside the app, the number of replies for each tweet will now be visible, and Direct Messages can now display rich content instead of just plain text links.

Even though the app still won't be able to offer a column-like view present in TweetDeck, the Tabs feature will allow users to easily switch between their search results, profile, timeline etc. This new feature essentially lets users to browse Twitter through the Windows 10 app with much ease and serves to make the app more convenient to use.

Notably, users can also choose to hide all the tabs at once or even choose to disable the feature if they want.

To recall, Twitter decided to discontinue its TweetDeck App in April last year in order to "build a simpler, more intuitive experience for all Twitter users."

Apart from the Tabs, the latest update has added emojis to Twitter's Windows 10 app. With the latest update, users can now choose to highlight a particular tweet at the top of their profile, which will be the first tweet that people will see when they visit the profile. Protected users will now have the option to aceept follower requests while users will also be able to "browse more of Twitter without an account," as per the update changelog on Windows Store.

The Twitter for Windows 10 update is already available and can be downloaded from Windows Store.