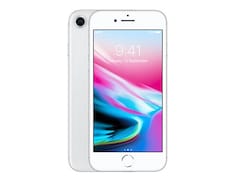 It’s not very often that two new iPhone models are upstaged at their own launch, but that’s exactly what happened at Apple’s September event this year. The iPhone X was the star of the show, the cool new kid everyone wanted to hang out with, while the iPhone 8 and iPhone 8 Plus were relegated to the role of the designated driver - boring, reliable, the one you know will be there once you are done partying with your new friends.

Apple iPhone 8 smartphone was launched in September 2017. The phone comes with a 4.70-inch touchscreen display with a resolution of 750x1334 pixels at a pixel density of 326 pixels per inch (ppi).

Apple iPhone 8 is powered by a hexa-core Apple A11 Bionic processor. It comes with 2GB of RAM.

The Apple iPhone 8 runs iOS 11 and is powered by a 1821mAh non-removable battery.

Apple iPhone 8 based on iOS 11 and packs 64GB of inbuilt storage. The Apple iPhone 8 is a single SIM (GSM) smartphone that accepts a Nano-SIM card.

Connectivity options on the Apple iPhone 8 include Wi-Fi 802.11 a/b/g/n/ac, GPS, Bluetooth v5.00, NFC, 3G, and 4G (with support for Band 40 used by some LTE networks in India). Sensors on the phone include accelerometer, ambient light sensor, barometer, gyroscope, proximity sensor, and compass/ magnetometer.

Apple iPhone 8 price in India starts from ₹ 35,999. The lowest price of Apple iPhone 8 is ₹ 35,999 at Amazon, and is available in Black, Gold, Red, Rose Gold, Silver, and Space Grey colours.