Android P was first announced back in March 2018 with the Developer Preview 1 rolling out for keen app developers. Since then, functionality and features have been steadily announced by Alphabet-owned Google that also revealed Android P's functionality extensively at annual developer conference I/O 2018. In an update on the Android Developers blog on Wednesday, the tech giant announced a new feature for Android P called Magnifier which aims to improve the user experience while selecting text.

Currently on Android Oreo, users need to long-press or double tap on the word that they want to select, to reveal shortcuts such as Cut, Copy, Select All, Web Search, and Translate. Users then need to drag the two indicators - placed on the left and right of the selected word - and extend them to the sentences or paragraphs that are to be highlighted. While this functionality will remain a part of Android P, a magnifier will be added on top of the text to allow for accurate selection. 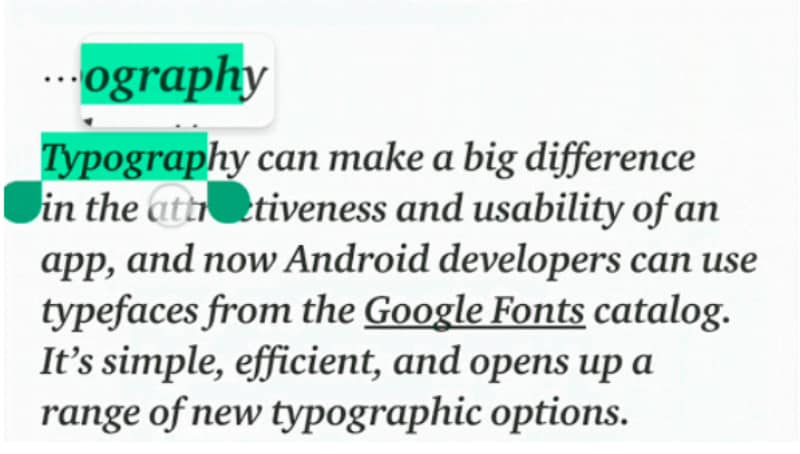 "The magnifier helps users precisely position the cursor or the text selection handles by viewing magnified text through a pane that can be dragged over the text," explain Florina Muntenescu, Developer Advocate and Siyamed Sinir, Android Text Technical Lead. "We wanted users to have the same experience across all apps, whether in custom widgets or during custom text-rendering, so we provided a Magnifier widget that can be applied to any view that is attached to a window. The Magnifier widget can provide a zoomed-in version of any view or surface, not just text."

Talking about magnifying elements in the UI, Android currently offers a magnifier option that lets users zoom onto any page in the Android device's UI using three quick simultaneous taps. This feature can be accessed by going into Settings > Accessibility > Magnification. Using this feature, you can also drag two or more fingers to scroll and pinch two or more fingers to adjust zoom. Zoom functionality cannot be accessed on the keyboard and navigation bar.

Earlier this month, Google released Android P Developer Preview 4/ Beta 3 with certain bug fixes and software optimisations ahead of the impending Android P public rollout later this year. Google also stated that this beta release, which arrives with the July 2018 Android security patch, is as close as it gets to the final build and could be considered a release candidate.