Android Oreo: 8 New Features You Need to Definitely Check Out

Google has officially launched the next version of its operating system in the form of Android Oreo. With the new update to its popular operating system, Google aims to improve security while adding new features to the list. The update is live and Google has mentioned that the update is in the carrier testing phase for the Google Pixel, Google Pixel XL (Review), Nexus 6P (Review) and the Nexus 5X (Review) and the updates will be rolling out via OTA soon.

Google has also listed device specific Android Oreo flash files for developers to use. If you have one of the aforementioned devices then you can flash it by using our guide. You can also get the update quickly by enrolling in the Android Beta program, however be warned that getting future OTA's can be an issue. We tried out Android Oreo on our Google Pixel, and here we've listed eight Android Oreo features that we really loved.

1. Faster boot times
One of the first things we noticed is insanely fast boot time for Android Oreo. Before updating the device, we clocked the Google Pixel taking close to 50 seconds to boot from the switched off state. With Android Oreo update we saw the boot time being cut down to just 18 seconds. By cutting the boot time to less than half, the device come online faster than before. We also experienced the Google A/B system partition at work as the Oreo update was installed without switching the phone off. Once the installation was over, the device asked for a restart permission, and loaded Android Oreo straight away.

2. Notification Dots
Android apps that have new notifications will now have a dot appear on the app icon to notify you. This isn't entirely new, something similar has been available on a few devices from Samsung, Asus, and HTC, among others, which indicated the number of unread notifications in each app. With Notification Dots, there is no counter but you can long press on the icon to peek at the notification right away. With Android Oreo, we will this feature roll out on all phones for a uniform experience. 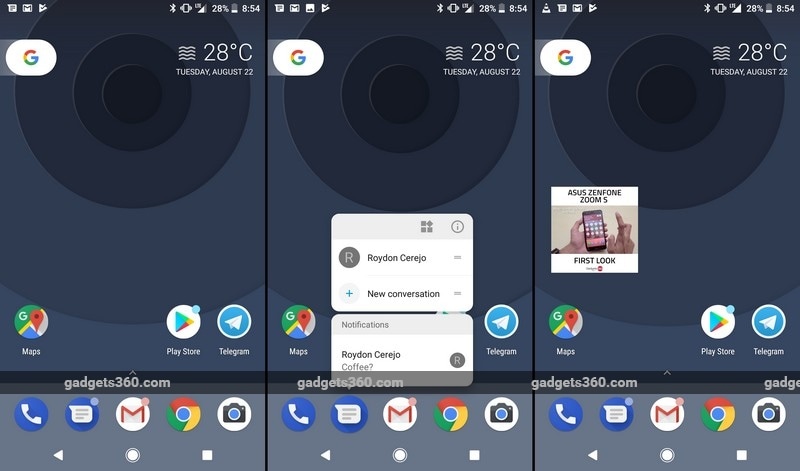 3. Auto fill and Smart text selection
Android Oreo also introduces the autofill feature, which lets the operating system and apps with the autofill API to autofill forms and passwords. Google can retrieve passwords saved in your account on Chrome and autofill it on your smartphone. Password managers like LastPass are also working on Oreo with the API, and can autofill your passwords.

Oreo also brings smart text selection, where the OS can recognize a phone number or an address. On selecting the text, for example a phone number, Android will display a call option along with the usual cut and copy option. Clicking this takes you straight to the dialler, but it can also take you to Google Maps if you select an address, for example. 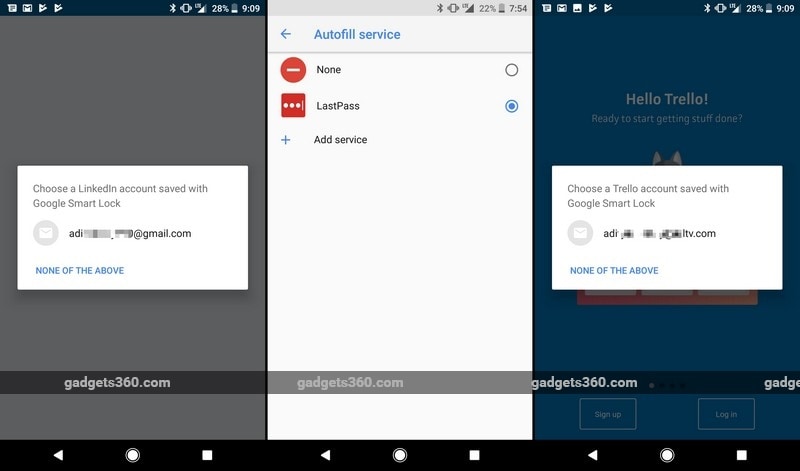 4. Settings redesigned
The settings menu on Android that we have been used to has been redesigned with the new Oreo update. Settings are condensed and only the ones Google thinks are frequently used are shown in the expanded view. With Oreo, Wi-Fi settings has been clubbed with Networks and others, with Google calling it Network & Internet. Similarly, other settings have also been condensed to reduce the number of options available at one go. While this may be a little confusing at first, it is pleasing to look at, and easier to use. 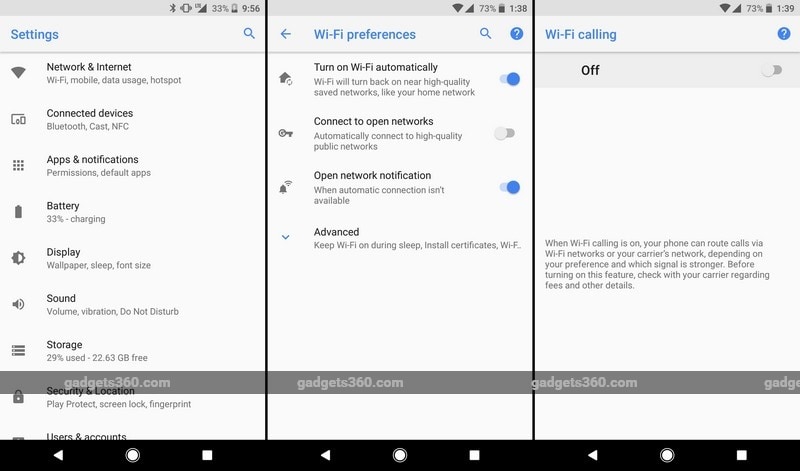 We also found Wi-Fi calling under the settings, which allows it to use a Wi-Fi connection to place a call. Reliance Jio is one of the carriers in India to support Wi-Fi calling. With this new feature you should be able to place a call on VoLTE networks through any Wi-Fi router you are connected to. Google has also gone ahead and changed the battery layout completely and it now shows statistics such as last full charge and screen on time straightaway.

5. Google Now gets revamped
Google has also revamped its Google Now app with the next version of Android. You have access to a lot of content now as it offers more news with a carousel to select more sources. It also gives you the option to select new actions and access to a few web based games as well. 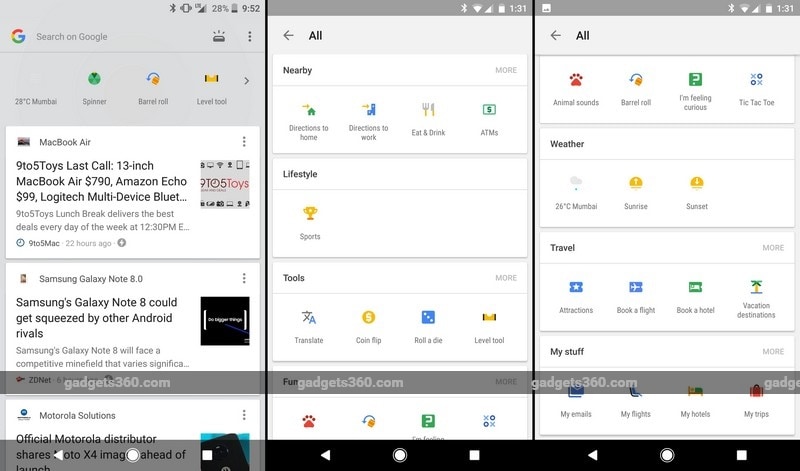 6. Picture in Picture mode
Picture In Picture is among the highlights for Android Oreo. This lets you minimize the video you are watching to a tiny window, allowing you to work on other things at the same time. YouTube is said to have the feature but needs YouTube Red to work. VLC player is also said to use PIP, and it should come to other mainstream media players soon.

7. Google Play Music Notifications
Notifications from the music player has got a tiny but cool update as well. When listening to music on the phone, the notification takes up the dominant colours of the Album Art for the song. So instead of the regular playback controls, you get colourful notifications which change with every song you play, making boring music controls look good. 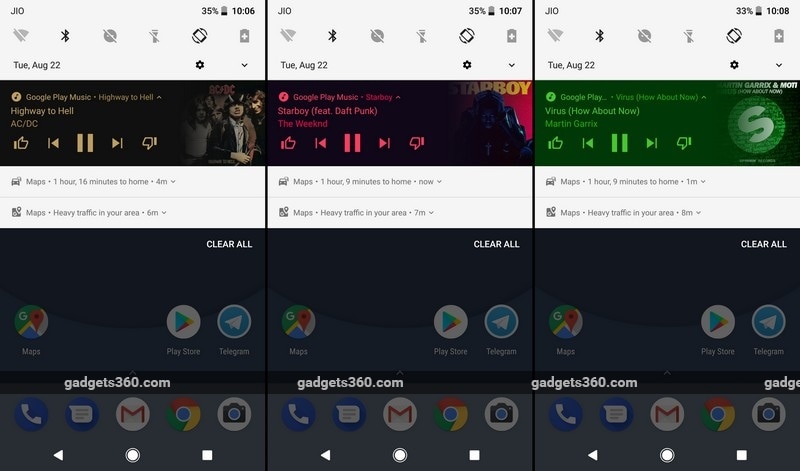 8. Installing unknown apps got simpler
Tired of allowing apps to install from unknown sources? Oreo allows you to whitelist unknown app installations from Chrome, Google Drive, and Gmail, without needing to enable unknown sources. So if you were to download an APK from your favourite site or from gmail, it can be installed without issues. To keep your device safe Google Play Protect is available in Oreo by default, and periodically scans the phone for malware apps. It will alert you about rogue apps from time to time to keep your Android device out of danger. 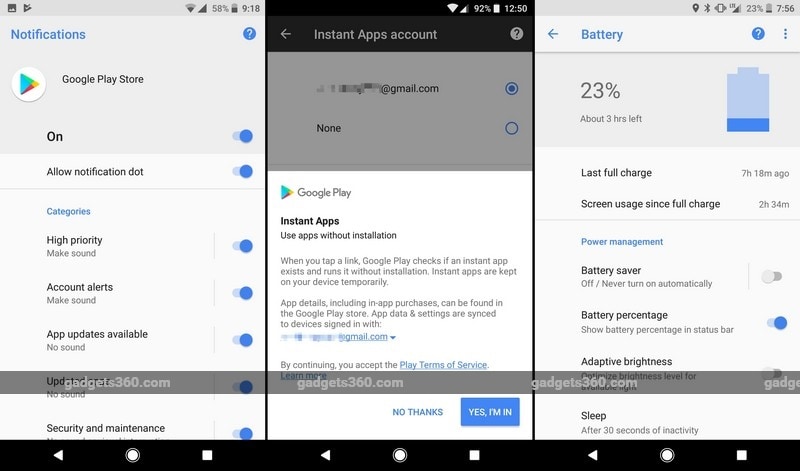 These were some of the interesting features we found in Android Oreo. You can also say the "Ok Google" command to an unconfigured device and it will take you straight to the configuration screen. Making it simpler than searching for the option. Which of these features sounds most interesting to you? Tell us, and the other readers, via the comments.