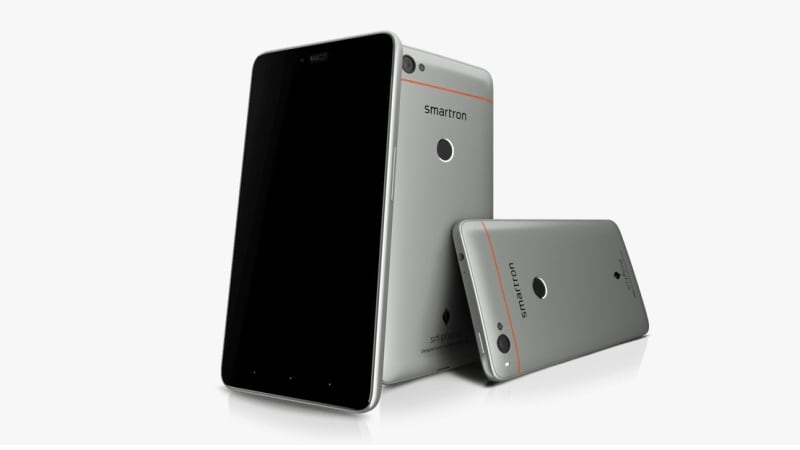 After some teasing back in February, Smartron has launched the srt.phone which is inspired by the "dependability" of Sachin Tendulkar himself. It has been launched in two storage variants in India, available exclusively from Flipkart from Wednesday itself, in a Titanium Grey colour variant. The 32GB variant priced at Rs. 12,999, and the 64GB variant priced at Rs. 13,999. Launch offers include a Rs. 1,500 discount when you exchange your old phone, free Sachin Tendulkar-design back covers worth Rs. 599, and free extended Smartron t.care warranty worth Rs. 1,499. Axis Bank Buzz credit card holders get an additional 5 percent cashback.

The Smartron Sachin Tendulkar phone runs on Android 7.1.1 Nougat and sports a 5.5-inch full-HD (1080x1920 pixels) display. It's powered by a Snapdragon 652 SoC that’s coupled with 4GB of RAM. For optics, srt.phone rear camera sports a 13-megapixel sensor with PDAF, a dual-LED flash, and an f/2.0 aperture, while a 5-megapixel wide-angle lens camera is in the front.

Smartron also says one Android security update will be provided every quarter, while at least three major updates will be released for the Sachin Tendulkar phone. The Flipkart listing is touting an Android O update will be available for the smartphone.

Nokia flagship Android phone leak hints at Snapdragon 835 SoC
HMD Global has so far launched the Nokia 6, Nokia 3, Nokia 5, and Nokia 3310 (2017) and now, a fresh report sheds light on the rumoured flagship could potentially shape up to be. MyDrivers reports that the Nokia flagship will sport a metal jacket, but doesn't dive any further into design details apart from that. The Nokia flagship Android phone has earlier been rumoured to sport a Snapdragon 835, 4GB or 6GB of RAM and a 23-megapixel sensor. The name of the device has not been revealed, but it is expected to launch sometime in June.

WhatsApp for Android gets separate video calling button
WhatsApp has quietly released a new stable update for Android users that brings some tweaks to the UI, most notably, a new video call button and the relocation of the attachment button. The new additions to WhatsApp were first reported earlier in March when they showed up for beta users (v2.17.93). The new tweaks don't scream out change, but are minimalistic in nature, similar to Google's Material Design philosophy that is being tried out for YouTube.

Microsoft Windows 10 S, Surface laptop launched
At an event in New York on Tuesday, Microsoft introduced Windows 10 S as a simpler, more secure operating system meant for students. Software for this OS is tied to the Windows Store, which means students can only run apps downloaded from the Store. According to Microsoft, Windows 10 S is built from the ground up keeping in mind classrooms and since students can only download apps from the Store, chances of being exposed to potentially dangerous apps are slimmer.

Microsoft's hardware partners like HP and Acer will be the first ones to launch laptops running the new OS. The HP ProBook x360 eEducation Edition and Acer TravelMate Spin B1 will be the new models and will carry a price tag of $299 (roughly Rs. 19,200).

Alongside the new OS, the company also announced the Surface Laptop, that will start shipping on June 15, starting at $999 (roughly Rs. 64,000). It sports a 13.5-inch PixelSense touchscreen display with 1080p resolution and base specs of an Intel Core i5 CPU, 4GB of RAM, and a 128GB SSD. The biggest highlight is that the Surface laptop is rated to offer up to 14.5 hours of battery life. Complementing this launch, Microsoft also launched an updated Arc Touch Mouse called Surface Arc Mouse.

Last but not least, Microsoft also announced a full-featured version of its desktop Office 365 application for education, which is coming to the Windows Store. The Office 365 for education suite of apps is free for all students and teachers - and it includes Word, Excel, PowerPoint, OneNote, Teams, and other classroom tools.

Apple India has 'record' March quarter
Apple announced its results for the January to March quarter on Tuesday and the company had plenty to cheer about its performance in India. "We set a new March quarter record for India, where revenue grew by strong double digits," Apple CEO Tim Cook said . Apple's Senior Vice President and Chief Financial Officer, Luca Maestri later added that India was one of the markets where Apple's quarterly revenue grew by "over 20 percent".

However, the company also reported a surprise fall in iPhone sales for its second quarter on Tuesday, indicating that customers may have held back purchases in anticipation of the 10th-anniversary edition of the company's most important product later this year.

Jelly, 'world's smallest 4G Android smartphone', launched
A very interesting smartphone has made its way on KickStarter looking for crowd funding, simply called Jelly. This mini-sized smartphone supports Android 7.0 Nougat, dual-SIM (Nano+Nano), and 4G connectivity. Manufactured by Shanghai firm Unihertz, it claims to be the "smallest 4G Android smartphone" in the world. The Jelly with 1GB RAM/ 8GB Storage is priced at $109 (roughly Rs. 6,900) and the Jelly Pro with 2GB RAM/16GB storage is priced at $125 (roughly Rs. 8,000).

Apple iPhone 8 slated to arrive in 2018?
So far, the anniversary edition of the iPhone is expected to come with augmented reality features, new Touch ID tech, OLED display, and edge-to-edge panel design, and much more. Because of all these new additions, there have been several alleged production issues reported that may cause a delay in the release of the iPhone 8. The note obtained by Business Insider cites supply chain sources to suggest that "key component shortages and technical challenges could delay the release of a high-end iPhone 8 device this fall."

Sony PlayStation 5 could launch in 2018
The PlayStation 5, PS5 or whatever Sony calls its next console may release sooner than you think. According to Macquarie Capital Securities analyst Damian Thong the PS5 could be out before the end of 2018. His prediction was cited in a Wall Street Journal report on Sony’s recent financial earnings wherein it came to light that the company shipped 60 million PS4s. If so, it fuels speculation that Sony could show off new hardware at E3 2017.

HTC U 11 video teaser reveals design details
HTC's 'squeezable smartphone' is making headlines every day, and now, a fresh teaser from HTC brings more design details of what is expected to be called the HTC U 11, ahead of its May 16 launch in Taiwan. The teaser video has the date and its tagline 'Squeeze the Brilliant U', with a blue smartphone taking shape with a thin sleek frame, and metal edges, where the sensors are expected to be located. The phone's logo at the back is revealed, however the small video refrains from giving us a full-blown look at the device.