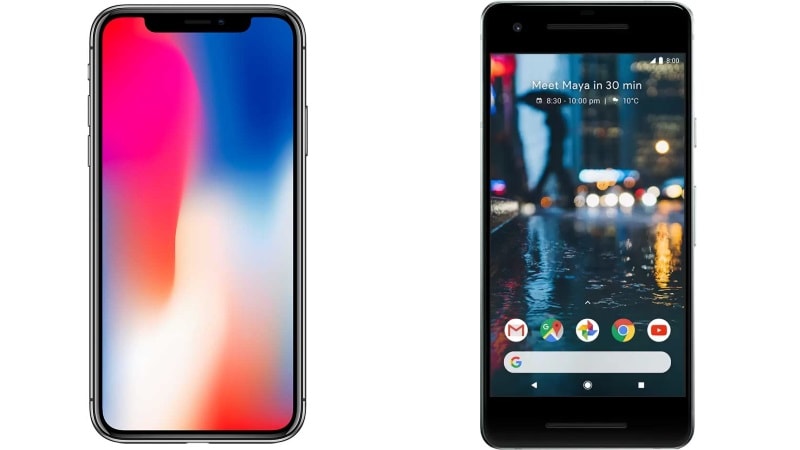 Reliance Jio has announced offers on iPhone X and Google Pixel 2 pre-orders in India. There’s an iPhone X buyback offer that gives prospective buyers 70 percent buyback after 12 months from purchase. Those looking for the Google Pixel 2 get Rs. 35,000 worth of benefits including cashbacks, one year of voice and data from Reliance Jio and Sennheiser earphones to name a few. The offers will be available only for the pre-order period, which ends on Tuesday for the Pixel 2 and Thursday for the iPhone X.

Jio Phone rumours: Reliance Jio says still ‘committed’ to feature phone
In other Reliance Jio news, the company has refuted claims that it’s looking to halt production of the Jio Phone in favour of an Android phone. In a statement to Gadgets 360, a Reliance Jio spokesperson said, “Jio Phone, ‘India ka smartphone’ is committed to fulfilling the country’s digital vision. Jio welcomes the initial 6 million Indians who are moving to digital life with the JioPhone and will soon announce the next Jio Phone booking date.”

Jio had earlier claimed to have received 6 million pre-bookings for the Jio Phone and the company insists it plans to follow through.

Airtel offers Celkon Smart 4G phone at ‘Rs. 1,349’
Airtel has partnered with domestic phone maker Celkon to bring down the effective price of the Smart 4G Android phone to Rs. 1,349. Under the new offer, customers will need to pay Rs. 2,849 to buy the handset, and then buy recharges worth Rs. 169 for 36 months. Alternately, they can choose to purchase recharges worth Rs. 3,000 in the first 18 months, and another Rs. 3,000 in the next 18 months to be eligible for the Rs. 1,500 cashback that lowers the cost of the handset.

Xiaomi Mi Max 2 permanent price cut in India
Xiaomi Mi Max 2 has received a price drop in India. With the new prices, the Xiaomi Mi Max 2 with 32GB of inbuilt storage is available for Rs. 13,999 (initially launched of Rs. 14,999), while its 64GB inbuilt storage variant comes at Rs. 15,999 (debuted for Rs. 16,999). Flipkart is making the deal even sweeter by offering you an exchange discount of up to Rs. 15,000 in return of your existing handset.

Nokia 2 specifications tipped by leaked benchmark listing
Nokia 2 has been spotted in leaked AnTuTu benchmark listing ahead of its anticipated official launch in India on Tuesday. According to the listing Nokia 2 has a HD (720x1280 pixels) display that would come in 5-inch size. There’s also Qualcomm’s Snapdragon 212 SoC with 1GB of RAM, and 8GB of internal storage. It’s listed with a 5-megapixel and 8-megapixel camera sensors that are likely to be available on its front and back, respectively.

Amazon Alexa app now available in India for Android and iOS
After launching the Amazon Echo in India, Internet giant Amazon has launched the Amazon Alexa Android and iOS app in India. It’s useful for setting up the company’s line of smart speakers. That aside, you can use the Alexa app for changing settings, monitoring previous requests, seeing what’s playing, adding new skills, or creating new routines. Tying in to Amazon’s e-commerce prowess, the Alexa app also is where you can go through your to-do list when you’re shopping by letting you create lists by talking to the Alexa voice assistant.

More Pixel 2, Pixel 2 XL issues reported
Another day and another Pixel 2 related issue reported. This time, some Pixel 2 and Pixel 2 XL users claim their units are having audio issues when recording video. Some of the other reported issues claim Android Auto is crashing on the new Pixel 2 devices and portrait mode shots failing to deliver on the Pixel 2 XL. Google is reportedly working on a fix.

Oppo R11s and Oppo R11s Plus specifications revealed ahead of launch
With LG, Samsung, Xiaomi, and even soon enough, OnePlus bringing bezel-less smartphones, Oppo is putting its efforts forward as well with the Oppo R11s and R11s Plus. The devices have passed certification in China according to reports. No price has been announced thus far with registrations for the duo’s first sale already open. According to the TENAA listing, expect the Oppo R11s to sport a full-HD+ plus 6.01-inch display, an oct-core Snapdragon 660 SoC, 4GB RAM, 64GB storage expandable to 256GB, and a 16-megapixel rear camera with a secondary 20-megapixel sensor along with a 20-megapixel camera on the front and a 3120mAh battery. The Oppo R11s Plus has similar specifications save for a 6.43-inch display, 6GB RAM, and a 3880mAh battery.

New AI system developed to outsmart CAPTCHA authentication
Vicarious - an artificial intelligence firm has put together a modified neural network to crack CAPTCHA after studying a few examples. Dubbed as a recursive cortical network, it uses past data to learn new processes and results then go back to the software. This is done over and over again until a solution is reached. By applying the principles of recursion to a neural network, researchers were able to reduce the learning curve of software drastically. Vicarious claims the system needs five training steps to crack Google’s reCAPTCHA 67 percent of the time.

iPhone Q3 shipments surge 40 percent in China; Apple reveals iPhone X screen repair cost
After an 18-month slump in iPhone sales in China, Apple saw a 40 percent surge in shipments in the third quarter in the country, according to research firm Canalys. Almost 11 million iPhones were sold in China from July to September 2017 versus the eight million sold during the same time last year. Previously, Apple had negative year-on-year growth in China for six quarters in a row.

"The high sell-in caters to the pent-up demand of iPhone upgraders in the absence of the iPhone X," said Canalys analyst Mo Jia, adding that price cuts on earlier models after the announcement of the iPhone 8 also helped.

Jio Phone Production Being Stopped? Reliance Jio Says It Is Still 'Committed' to the Feature Phone
Amazon Teaches Alexa to Speak Hinglish. Apple's Siri Is Next