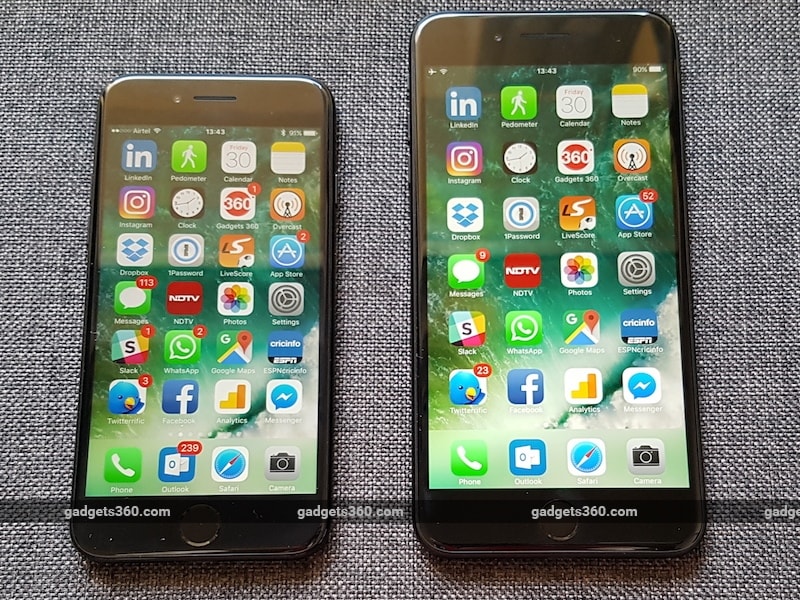 If you were worried about your old iPhone slowing down, this bit of news isn't going to sound good. Apple has admitted that when your iPhone's battery weakens, the company takes some measures to ensure that you don't face random shutdowns. In plainspeak, this means that Apple slows down your iPhone's processor when the battery isn't able to cope. Apple says that when the phone's battery is unable to supply peak current, it takes measures to reduce power demands, which leads to the processor slowing down.

This is not an iPhone-specific problem, but Apple has taken this design decision to ensure that random shutdowns don't affect your older iPhones. However, you can easily get this fixed by getting your iPhone's battery replaced. This can be done for $79 (roughly Rs. 5,100) and it's free if you bought the Apple Care extended warranty, in countries where it's available. The issue stems from the fact that all Lithium-ion batteries, used in electronics across the industry, degrade over time and they face issues when supplying peak current.

In slightly better news, a new report claims that Apple plans to combine iPhone, iPad, and Mac apps going forward. Currently, iPhone and iPad apps are already similar and developers can easily optimise these for both devices, but Mac apps have to be designed separately. This move, if the report is true, will ensure that all apps on Apple's platform work across all Apple devices. Microsoft tried to do something similar with Windows 8, but it failed miserably. However, Apple has been slowly working towards this by combining iPhone and iPad apps a few years ago and slowly making the iPad Pro more like a laptop than a tablet. No one knows what the future holds, but if this story is true, a big change could be forthcoming in the world of Apple.

Nokia 9 leaked once again?
The latest leak from the world of Nokia concerns its upcoming flagship smartphone -- the Nokia 9. This leak claims that the Nokia 9 will sport dual selfie cameras. This leak claims that the smartphone will feature two five-megapixel selfie cameras on the front, which apparently support 1080p video recording. That's good news for those who click selfies or record lots of vlogs or even love posting live videos using the selfie cameras. The smartphone is expected to ship with Android 8.0 Oreo, and to be powered by Qualcomm Snapdragon 835 processor, and up to 128GB inbuilt storage.

Samsung Galaxy S9, Galaxy S9+ display details leaked
Another one from the rumour mill. This rumour suggests that the two new smartphone models that have appeared on an HTML5 benchmarking website are the Samsung Galaxy S9 and the Samsung Galaxy S9+. This leak tips that both phones will feature a near bezel-free design with a screen aspect ratio of 18.5:9. This rumour also claims that the phones will ship with Android 8.0 Oreo and an earlier rumour had suggested that these phones will feature dual cameras at the back. Although there's no official word at the moment, these phones are expected to launch in February 2018, with availability from March.

Magic Leap One mixed reality goggles coming in 2018?
Magic Leap is an American startup that was known so far for attracting massive rounds of funding and operating in secrecy until very recently. Now, it has unveiled the products it has been working on all along and that is mixed reality goggles called Magic Leap One. This product is available as a "creator edition", which basically means most people can't buy it. It's only available to creators who can design mixed reality experiences using the Magic Leap One. This headset comes bundled with a wireless controller and an external computing unit called Lightpack, which powers Magic Leap's proprietary spatial computing platform.

Netflix adds HDR streaming support on Windows 10
If you care about the quality of the TV shows and movies you watch, then you have to be pleased at Netflix's constant push for better quality. Many Netflix shows now support 4K and HDR (High Dynamic Range), the latter being arguably more important for better picture quality. Netflix HDR streaming is now available on Windows 10, but with some riders. This tech is restricted to the Netflix app and Microsoft Edge browser on PCs running Intel's 7th generation Core (i3, i5, or i7 7xxx or 7Yxx) or higher CPUs. Of course, you also need an HDR capable display to enjoy your favourite content in the best possible quality.